You are at:Home»Current in Fishers»Made from clay 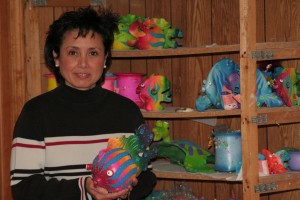 At first glance, nothing particularly says “artist” about Stephanie Pierson-Hutson – that you have to glean from her surroundings.

Casually leaning on a kitchen counter in slacks and a black sweater, Hutson plays the unembellished spindle to a world she’s woven around herself. It’s a world of color and relics. Two pull-handle slot machines overlook shelves of pottery, much of it created by her mentor, Jim Kemp, in a style that’s nothing short of Dr. Seussical: ceramic pots ease from orange to green to purple along their length; pots with red impressions left in an orb of yellow; pots with legs and long, whorled spouts. Then there are paintings – these are Hutson’s – of flowers; close-ups of petals and stalks and bulbs.

On the counter, a small radio plays a Gin Blossoms CD, one of their first two albums, which is something of an artifact itself.

This is “off-time” for Hutson, a period which lasts roughly from Dec. 1 to April 30, which isn’t nearly as restful as it sounds.

“This is when I’m home and cranking out the inventory,” Hutson said. “Then after April, I’m on the road every weekend. As soon as I make it, it’s priced, packed and moved into a van. I sort of live out of boxes.”

The making of an artist 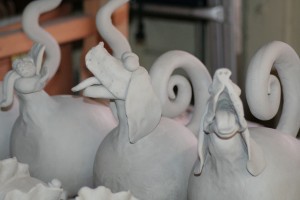 “When I was younger, my parents – my father especially – saw that I had … something, and encouraged me to follow my art,” Hutson said. “They made sure I had art classes all my life.”

Thanks to her parents’ support, Hutson spent plenty of time with a drawing pencil and paintbrush, but she never touched clay until she was a freshman at Herron School of Art and Design, where she says she fell in love with the medium.

After graduation, Hutson felt she couldn’t go to work for someone else. Instead, she waited tables. When she had it, free time was spent entering pieces into art fairs and teaching classes at theIndianapolisArtCenter.

“That was my life for a couple of years,” she said.

Then, Hutson had a “mistake waiting to happen,” as she tells it.

“I had a vase fall over on a potter’s wheel. I smashed it, and saw a fish out of it. I got into this whole series of fish and aquatic shapes with very bright colors,” she said.

These would become Hutson’s signature creations: marine creatures of all shapes and sizes which she painted, rather than glazed as traditional ceramicists do, in bright acrylics and enamel. Her 2,000-square-foot basement studio is now filled with hot-pink blowfish and rainbow-garbed turtles. There are new designs on display too, including clocks shaped like penguins and palm trees, which Hutson says she can’t keep in stock. In all, she regularly produces more than 200 designs, most of them aquatic. She says her fascination with all things marine is just as murky to her as anyone else.

“To me … I think of vacation. The warmth. The palm trees,” Hutson said. “I don’t know why, but they have always appeared in my work.”

Life out of boxes 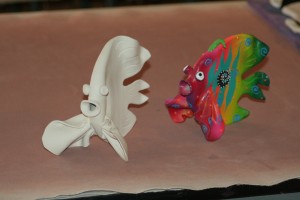 In 1991, Hutson and now-husband Jeff decided to go “full force with this art fair business.”

The pair traveled together for 18 years selling Hutson’s creations at art fairs around the country, most of them in the Midwest, though at times as far away asFlorida. The business allowed the pair to support themselves and buy their home, which sits along the bank of theWhite Riverin Fishers.

“We both decided very early on that we didn’t want to be hard-sell people when it came to the artwork,” Jeff, 47, said. “Stephanie was adamant that she wanted people to buy it because they liked the artwork, not because someone was trying to sell them something. She produced what she liked, and we let it sell itself.”

Not an artist himself, Jeff said nevertheless he loved living and working on the road.

“Being on the road … the days we did that were great,” he said. “I’m a people person, so in that respect it was almost like a sales job. We were interacting with customers and answering questions. It was a lot of fun, there was no doubt about that.” 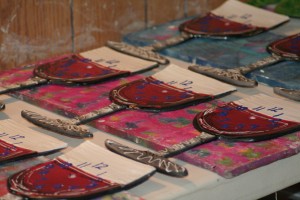 The economy has slowed the art fair business in recent years, Hutson said. She now travels to fairs by herself most of the time, spending her weekends on the road and her weekdays at home in Fishers, creating new pieces to sell, and spending time with her husband, their 10-year-old son Trace and their two dogs, the older of which is apparently still acclimating to his younger, more energetic puppy companion.

“I’m very fortunate to still be doing what I love to do,” Hutson said. “I know a lot of artists are struggling in this economy.”

Jeff now works for Noblesville-based Window Makeover. He said spending less time on the road was just part of the natural evolution of their family.

“Until (kids) get in school, it’s easy,” he said. “You can travel all the time and it doesn’t change anything. But, we would talk more and more about a way in which one of us could be with him all the time.

He loved growing up in it, I know that. Now he’s developing his own personality, his own style. He’s very into athletics, so he would much rather be home playing basketball or football or baseball than going on the road.”

While home, Hutson is constantly in production mode. The whole process from raw block of clay to finished piece takes two weeks. When she’s throwing on the potter’s wheel, Hutson said she can produce 100 pieces a day – pieces which then have to be dried, fired and painted, not to mention stored somewhere. Once complete, the pieces are transported to art fairs inMichiganorOhioor any number of other states to be sold.

“Being on the road, it’s like having a second family,” Hutson said. “You see the same artists at many of these shows, like a pack of gypsies roaming the country.”

Although Hutson occasionally allows herself breaks to paint on canvas or, most recently, take glassblowing classes, she said she still loves her primary medium, even after 25 years of working with clay.

“Going to the shows, meeting the customer, getting a feel of what they like and don’t like … that gives me the motivation to create these pieces,” Hutson said. “I wake up every day and can’t wait to go to work.”

Jordan is the managing editor of Current in Fishers.