You are at:Home»Current in Fishers»Westboro Baptist Church pickets local churches 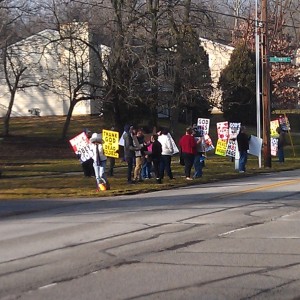 Members of the Westboro Baptist Church of Topeka, Kan., traveled to Indiana Feb. 5 to picket at central Indiana churches, as well as Lucas Oil Stadium. Counter protesters traveled from various towns to oppose Westboro at all of the locations.

From 9:30 to 10:15 a.m., protesters stood at the edge of the East 91st Street Christian Church’s property, located just south of Fishers at 6049 E. 91st St., holding vibrantly-colored signs showing their religious messages. Counter protesters congregated on the opposite side of the street.

“I think what the Westboro Baptist Church stands for is something that has to be protested,” said 19-year-old Timothy Cox of Franklin. “I’ve seen their Web site and looked them up on YouTube. They need to know hate won’t save.”

Cox stood alongside Taylor Childs, 16, and Kyle Casteel, 17, who both traveled from Mooresville, to be a part of the counter protest against WBC. The teens made their own signs they brought with them to the picket.

The Westboro Baptist Church has garnered headlines for its inflammatory pickets of the funerals of soldiers. The church’s pickets typically consist of church members – most of them immediate family members of Pastor Fred Phelps – waving signs with anti-gay and anti-American slogans.

When board members of the East 91st Street church received word their church would be a picketing site on Super Bowl Sunday, a posting was made to inform other members about the events to take place that day. According to the posting, Westboro church members were protesting because East 91st St. Christian Church has a female preacher, which conflicts with the WBC’s beliefs.

In order to protect church members that morning, board members blocked off one of the parking lots closer to the WBC demonstration, and encouraged churchgoers to use different entrances. Local authorities were also present throughout the duration of the picket to ensure maximum safety for the members of the East 91st Street church.

“I was aware of (the protest), but I didn’t let it affect my decision to attend. I came to worship,” said 51-year-old Fishers resident Angela Erickson.