You are at:Home»Current in Carmel»Carmel Community»Man walking nation for Riley comes through Carmel 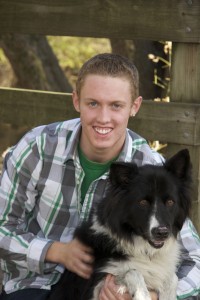 A former Riley Hospital for Children patient is trekking across the nation to give back to the hospital.

Jesse VanOsdol, 20, suffered second- and third-degree burns in a bonfire accident the summer after his high school graduation in 2010. He spent several weeks in the hospital; however, now that VanOsdol has recovered from his burns, he has set upon a walk across the nation to raise money for Riley Hospital for Children. VanOsdolsaid his trip is inspired by the “small children with big hearts” whom he met during his time in the hospital’sburn unit.

He began his journey Nov. 11 in California and had raised more than $8,000 at a midway point in Texas. His goal is to walk to Florida and raise a total of $15,000 for the hospital in the process. Last weekend, his journey brought him to Carmel.

But the trip has not been easy.VanOsdolrecalled one story in which he woke up in the middle of the night “because it sounded like someone was throwing buckets of water against (his) tent.”As it turned out, he was caught in the middle of a Santa Ana sandstorm and 80-mph winds. Despite the hardships, he said he is grateful of the people he has met on the trip and those who have donated to the cause. VanOsdol also is thankful, he said, of the support he has received from Grace Community Church and his parents.

His mother, Jane VanOsdol, said she was initially worried about her son walking across the nation, but is proud of his walk and the money it will raise for the children in the burn unit.

“Being there is just so difficult,” Jane said.

VanOsdol’s father also is supportive of his son’s walk, and will get a firsthand look at what his son has been experiencing the last few months. He will be joining VanOsdol for a week when they go back to Austin, Texas, though he said he does not know if he will be able to keep up with his son, who typically walks 20 to 25 miles per day. VanOsdol will be returning to Texas Saturday, and from there, he will begin heading toward Florida.

For more information or to donate to VanOsdol’s cause, visit www.firstgiving.com/fundraiser/StepItUpJesseVanOsdol/HikesAcrossAmerica.