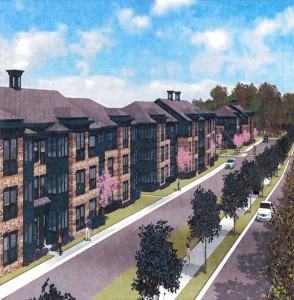 A proposed development just west of U.S. 31 has residents of adjacent neighborhoods concerned.

On the agenda of tonight’s Carmel Plan Commission meeting is a public hearing during which plans are expected to be presented for a proposed development dubbed Highpointe on Meridian Street. The applicant is seeking approval to rezone,to a planned unit development,27 acres at the southwest corner of 136th and Illinois streets, which is zoned B-5/business.

The development could include multi-family housing units, office spaces and a retirement community, and residents are concerned about the prospect of having high-density development adjacent to their properties and the traffic that would accompany the finished project.

“I think what a lot of people are saying is, we’re not trying to stop progress, but we want to see responsible, residential-friendly development on that land,” said Brad Cisco, president of the Parks at Springmill Homeowners Association, which includes neighborhoods Park Meadow and Park Place. “We’re not seeing that in the request for this planned unit development.”Cisco said members of his HOA are unsettled by the applicant’s proposal to build office buildings 72 feet in height and residential and commercial buildings three stories, or 60 feet tall.

A packet provided by the applicant to the Plan Commission acknowledges residents in the area “have expressed concerns about two issues in particular: the potential impact on traffic in the area and screening the development from the adjacent neighborhoods.” The packet says the development team commissioned A&F Engineering to perform a traffic generation analysis for the multi-family housing complex. The firm found that the majority of traffic will use the proposed Illinois Street entrance instead of the second on 136th Street.As for the screening issue, the packet says the development team is working on plans for an earth mound with a 6-foot privacy fence, which it says will provide the desired screening.

“They’re not offering us reasonable barriers between their property and ours,” he said. “Quite frankly, there is no barrier reasonable for a 72-foot-tall office building.”

In regards to the traffic analysis, Cisco said traffic in the area already is an issue during rush hours, and said he and his neighbors doubt the existing infrastructure can handle the demands of the proposed development.

Cisco said his HOA would like to see a compromise that includes less density and, ideally, only office buildings constructed on the property.

“We’d like to see development that blends in more with the properties surrounding this one,” he said. “We really want the city to not go along with the developer’s plans to what we think is over developing that property.”

The Plan Commission is scheduled to meet tonight at 6 p.m. in the council chambers of City Hall.