You are at:Home»Current in Noblesville»INDOT: U.S. 31 construction to end early 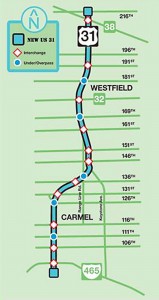 INDOT has announced its intent to speed up U.S. 31 Hamilton County construction using contractor financing, a public-private partnership strategy enabled last year through one of Gov. Mitch Daniels’ legislative initiatives. Under this proposed plan, the project would open to traffic by the end of 2015, three years earlier than expected.

“We’ve found a way to bring this project forward by three years for the people who have waited for so long for U.S. 31. It will be bid in one bundle, and be built less expensively and years sooner than would have otherwise been the case,” said Daniels, who made the announcement at the 2012 Road School Conference at Purdue University.

In May, Daniels signed into law Senate Enrolled Act 473, which allows for expanded use of private capital for transportation improvements. Using this new law, INDOT intends to bundle remaining construction phases for U.S. 31 Hamilton County into one contract, taking advantage of low construction and financing costs. INDOT would then repay the contractor over seven to 10 years using state and federal transportation resources.

Under this proposed plan, INDOT is exploring closing U.S. 31 to traffic for accelerated construction of an overpass at 126th Street and roundabout interchanges at Main and 136th streets.

Those interested in learning more about the schedule and maintenance of traffic changes to the project, as well as current and upcoming construction, can attend a public open house March 29 at Carmel High School’s main cafeteria, 520 E. Main St. The open house will run 5 to 8 p.m. with a presentation scheduled for 6 p.m. Interested in learning more, but can’t attend the open house? Check out updates on the project Web site at www.us31hamiltoncounty.in.gov.