You are at:Home»Current in Westfield»Westfield Grad named Marine of the Year 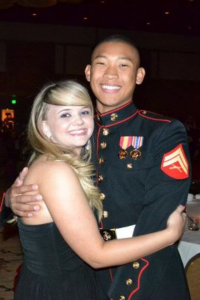 A Westfield High School alumnus has made a national impact as a Marine. The 2009 grad was recently named Marine of the Year.

Cpl Andy Nguyen, 1st Maintenance Battalion, who joined the marines after graduating high school, said the honor is an opportunity he may never have if he wasn’t passionate about joining.

“My parents were very hesitant about me joining, but once they realized I was dead set on this they accepted it,” Nguyen said.

“When I first saw Andy he was dressed kind of like a skater, sitting on our kitchen countertop and I thought this isn’t going to work,” Williams said. “He exceeded every quality for a husband a father would want for his daughter.”

Although the Nguyens are currently stationed in San Diego, Williams said moving his youngest daughter across the country was a more than tearful experience.

“It was a heartbreaking thing to leave her in California, but Andy is the kind of guy who can put a parent at ease,” Williams said. “He put his hand on my shoulder and said, ‘I got this, it’ll be ok.’”

Although Nguyen has a stoic and strong role serving our country Williams said he still has the same qualities that made William’s daughter fall in love with him in high school.

“They’ve been married for four years and together since they were teenagers, and they still are so in love and have so much fun together,” Williams said. “He deserves every honor he’s given.”

Bguyen said he credits his wife for his success.

“I thank my wife for all of this, if wasn’t for her I wouldn’t be here [in response to receiving his title].”