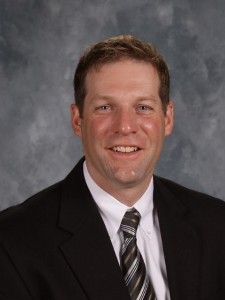 At the March 26, 2012 School Board Meeting, Mr. Todd Crosby was unanimously approved by the School Board of Trustees to be the new Clay Middle School Principal starting July 1, 2012. Crosby is an experienced middle school administrator who comes to Clay Middle School with a wealth of experience and expertise. Currently serving in MSD Decatur Township, Crosby is the Director of APEX (a project-based small learning community) while also serving as Assistant Principal of the “Blue House” at Decatur Middle School.

Prior to serving in MSD Decatur Township, Mr. Crosby served as the Principal of Triton Central Middle School, which was named a “National School to Watch” by the National Forum to Accelerate Middle Grades Reform.

Mr. Crosby also has served as a social studies teacher in school corporations in Illinois and Indiana.  He earned a Master of Arts in Educational Leadership from Aurora University (Illinois) and his BS from Ball State University.