Last year’s event (pictured above) was the biggest one in Fishers history, but this year’s egg hunt promises to be even larger. (Submitted photo)

The Kiwanis Club of Fishers has been putting on an egg hunt every Easter weekend for the past 30 years. This year, the egg hunt is planned to include more than 15,000 plastic eggs, making it the largest egg hunt in the area.

“(It) has not always been this big. It started in the early ʼ80s as a smaller affair. In the early ʼ90s, we partnered with the Town of Fishers Parks Dept. and moved it to Holland Park. In 2000, we had 10,000 eggs. Starting in 2002, we had 12,000 eggs, and it has grown steadily since then. This is our biggest year yet,” said Chad Garrard, vice president of the Kiwanis Club of Fishers.

Hours of preparation will lead to an egg hunt that will ultimately last less than five minutes. Garrard recorded the total time of last year’s hunt and it took less than two-and-a-half minutes for the children to find all the eggs.

“We spend two of our regular meetings in March stuffing the eggs. These meetings are attended by Kiwanis members, but most of the work is done by various youth groups with whom the Fishers Station Kiwanis Club has a relationship with. These include Key Club members from Hamilton Southeastern and Fishers High School, as well as Builders Club members from St. Louis De Montfort and Riverside Junior High. We also get a lot of help from the Royal Rascals of 4-H. This year, we had approximately 60 volunteers from these groups at each meeting,” said Garrard.

After a full month of preparation and a full morning of spreading eggs, the hunt will finally take place Saturday at Roy G. Holland Memorial Park in Fishers. The Easter Bunny will be in attendance and available for pictures starting at noon. During the hunt, eggs will be divided into different areas based on age to avoid any younger children run over by larger children. Garrard said donations are accepted, although not expected. 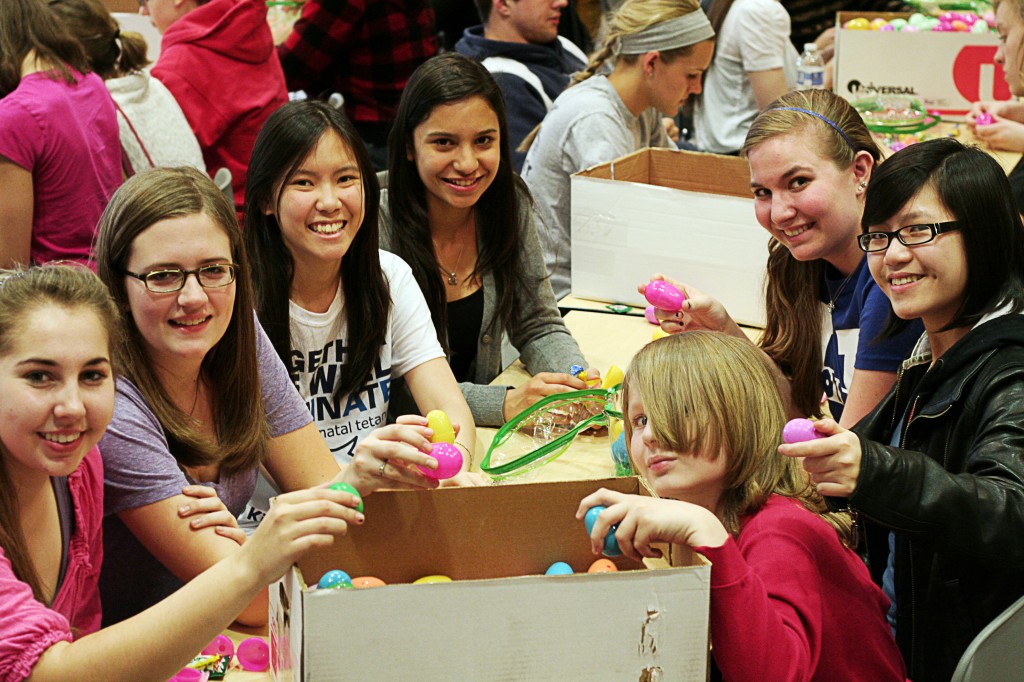 Hamilton Southeastern and Fishers High School Key Club, as well as St. Louis De Montfort and Riverside Junior High Builders Club, were on hand twice throughout March in order to stuff all of the eggs for this year’s event. (Photo by Jordan Fischer)

“This is our 30th year doing the Easter egg hunt. It’s a great event and we think it’s a great way to kick off the season and welcome the warmer weather activities,” said Garrard. “The flowers and trees are blooming, birds are chirping and Holland Park always looks great. And since we hold it on the Saturday before Easter, people are free for the real Easter celebration on Sunday.”