You are at:Home»Current in Westfield»‘Grandma Anna’s Banjo’ Is Program For Sheridan Heritage Celebration 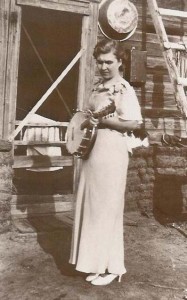 The Sheridan Historical Society will focus on music and how it brings and keeps families together at its 2012 annual dinner, Sheridan Heritage Celebration, Thurs., Apr. 26, 6 p.m., Sheridan Public Library Community Room.

The spring gathering always brings together heritage and cultural interests in the Sheridan area, and programs are designed to highlight both heritage and culture. With Sheridan’s new investment of multi-state events and activities, the community is emerging as a bluegrass music destination.

The Morris Family, members of the society, will feature tales of music heritage of Grandma Anna and their South Dakota family origins known to have built family ties around banjo performances at home. Along with other family members, they were captured by both country and bluegrass sounds. According to Betty Lee Cooper, event chair and second vice president of the society, the program will feature stories retold by Robin and Brian Morris as well as a musical performance by son Jeremy Morris, banjo, and Dave Avanatti, guitar.

Robin’s family lived large with music at its core. Joseph Mark Booth grew up in the sand hills of Nebraska. He worked as a ranch-hand and for the Burlington-Northern Railroad. He then became an aviation mechanic and pilot. He enjoyed entertaining with his musical ability at dances and various other groups. His wife, Anna K. Petersen, shared the love of music with him. They were life-long members of the Tri-State Old Time Cowboys Association of Gordon, Nebraska. He played guitar and she played banjo. Much of the cowboy music was written for and brought to the American public through the cowboy films of the 30¹s & 40¹s and was widely popular. Mark and Anna Booth were on hand, along with three other musicians, to provide the musical segment of the Nebraska educational television program ‘Grand Generations.’ They also entertained while scene changes were made.