You are at:Home»Current in Westfield»Playing with senses 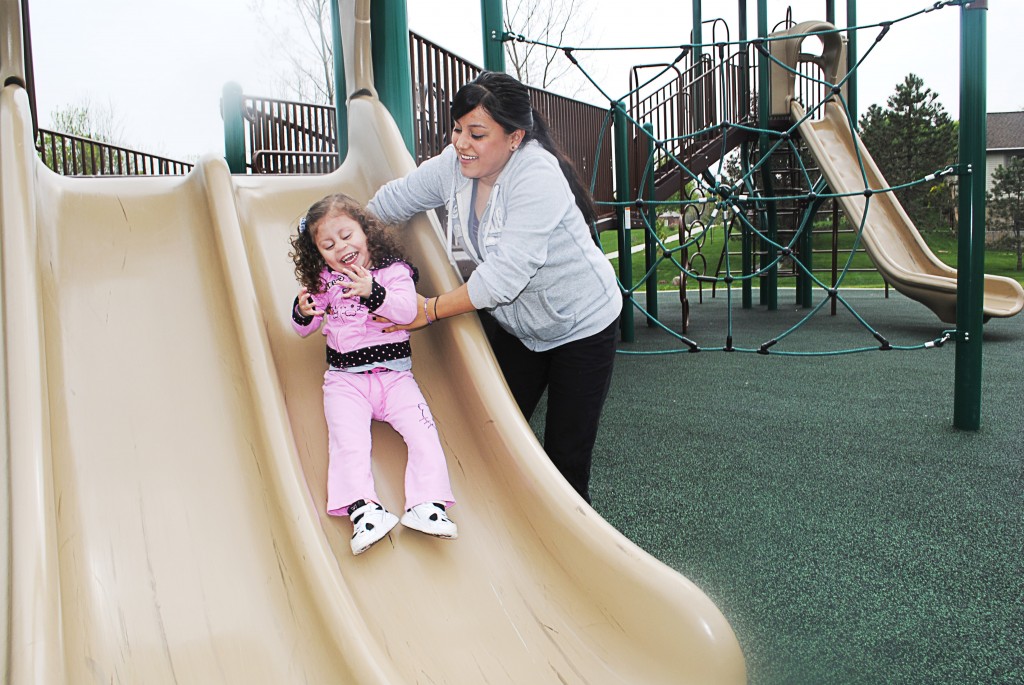 Jazmin Rivera and her daughter, Camilla Rivera, have fun on the slide at Sensory Gardens. (Photo by Lindsay Eckert)

Westfield’s Freedom Trail Park is allowing children with limited abilities to explore a world that is a daily adventure for most children: playing outside.

Westfield Rotary Club has teamed up with Westfield Parks & Recreation with the assistance of Hamilton County Autism and Support Group and local Westfield Boy Scout troops to create and continuously develop the only sensory garden for autistic children in Hamilton County.

The garden features wide ramps and handicap-accessible platform swings. Kurt Wanninger, former Westfield Rotary Club President, said children who may have not been able to play outside at a playground now have a welcoming place.

He said the all-inclusive playground is the first garden in Indiana to use rubber instead of mulch.

“The parents who visit the playground with their children praise its design,” Wanninger said. “At school playgrounds, the students just have to circle the playground and not be able to be part of it because the mulch makes it difficult. The rubberized ground and ramps allow the kids to drive to the top of the forts; they can actually interact instead of just watching other kids interact.”

Park-goers may see Sensory Park as a normal play destination with slides, swings and small places to hide where kids can let their imaginations run wild.

Although some of the sights may be familiar to a park, it touches senses autistic children usually don’t get to experience at a public park, such as smell, sounds and touch.

“It’s in a secluded area (located at the back of Silver Lakes subdivision), and students can play in the grass, smell flowers and listen to wind chimes Boy Scouts have made,” Wanninger said.

Jazmin Rivera’s daughter, Camila Rivera, suffers from Stickler syndrome, and Jazmin said the park has created amazing moments for a mother to see.

“My daughter has to use a walker and hasn’t been able to walk by herself,” Jazmin said about her 3-year-old. “Two days ago, she just started walking to the slide. She saw other children walking and playing and I think that motivated her, and the type of equipment on the playground allowed her to do it.”