You are at:Home»Current in Westfield»Westfield resident wins $250k in Mega Millions drawing 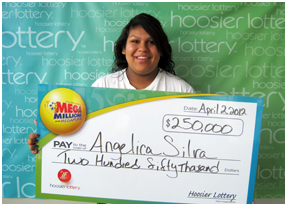 One Hoosier got a sweet piece of last week’sMega Millions action, missing Friday’s historic $656 million jackpot by one number. Angelica Silva of Westfield purchased a ticket at Speedway at 519 W. Main St. in Westfield that matched the first five numbers, but not the Megaball number, and is worth $250,000.

She claimed her prize recently at Hoosier Lottery Headquarters, accompanied by her boyfriend, Alberto Mendoza, and his mother, Maria Mendoza.

Silva is a stay-at-home mom to a 3-year-old and is expecting her second child in June. She hasn’t formulated a long-term plan for her winnings yet, but ultimately hopes to use her winnings to benefit her children.

“You don’t expect something like this to happen in your life,” said Silva. “It’s overwhelming.”

Silva is one of 161 players nationwide to match the first five numbers, but not the Megaball number, in the recent drawing. She is the only Hoosier to do so. Indiana retailers sold 220,438 winning Mega Millions tickets with winnings of $1,295,801 for the recent drawing. An additional 21,659 winning Mega Millions tickets in Indiana included the Megaplier option and accounted for an extra $272,580 in prizes.

The Hoosier Lottery is committed to providing innovative and entertaining lottery games for the benefit of the citizens of Indiana. In fiscal year 2011, the Hoosier Lottery generated $188 million in net income, which was used to significantly reduce the motor vehicle excise tax for all Hoosier drivers and also supported the pension funds for retired Indiana teachers, police and firefighters. Player prizes for the fiscal year totaled $495 million and $56 million was earned by Indiana retailers on the sale of Hoosier Lottery products.

Since its inception in 1989, the Hoosier Lottery has produced $4 billion in net income for the citizens of Indiana, nearly $1 billion in commissions and bonuses for participating Indiana retailers, and has paid out $8.5 billion in player prizes.

For more information, please contact Al Larsen at alarsen@hoosierlottery.com or 242-8803.