You are at:Home»Current in Fishers»Fishers Town Council – 6/18 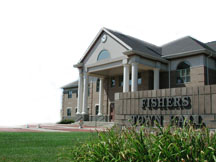 Action: Request to approve the installation of a traffic signal at 126th Street and Promise Road passed