You are at:Home»Current in Zionsville»Patrick’s damaged in blaze 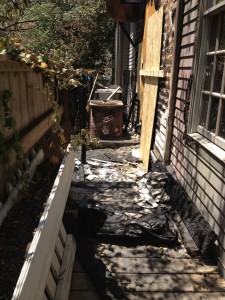 The damage to the south exterior of Patrick’s. Caroline Daily photos

Fire crews were called to Partick’s Kitchen and Drinks, 175 S. Main St., in the early morning hours of Saturday, June 16 after witnesses reported hearing an explosion.

As Zionsville, Carmel and Hendricks County firefighters arrived on the scene, substantial flames on the restaurant’s south exterior were reported. No injuries were sustained, and damage was confined to the initial area of engulfment.

Further comment from the business revealed that no explosion took place, and that the fire did not start in the kitchen but outside the establishment.

Patrick’s is slated to host the monthly Zionsville Chamber of Commerce gathering on July 3.