You are at:Home»Current in Noblesville»Local students attend Hoosier Boys State 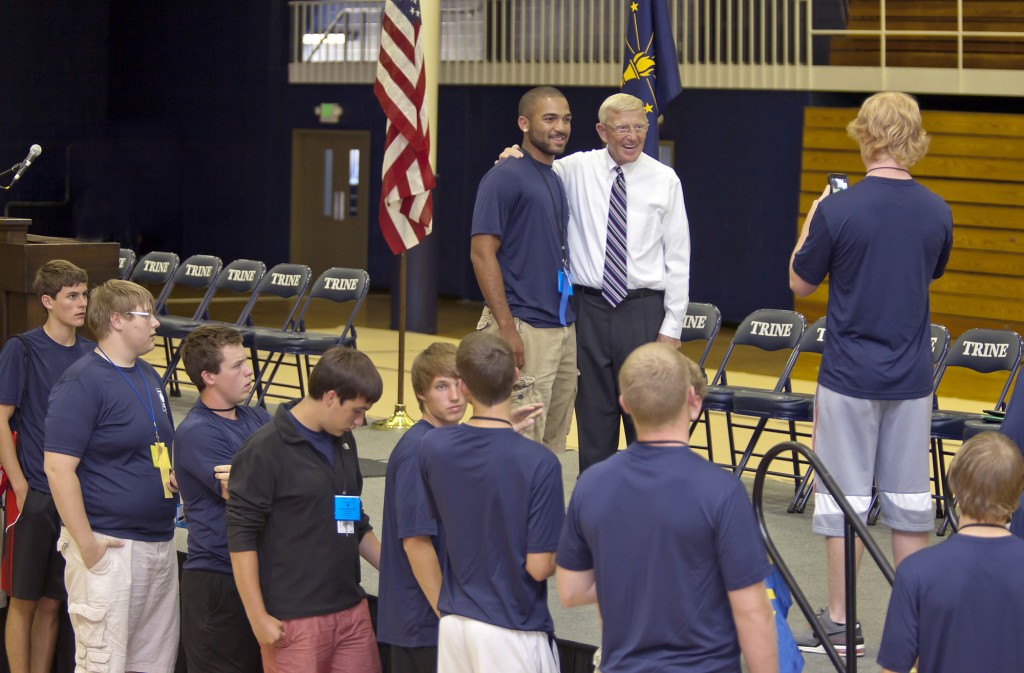 Noblesville High School students Eric Applegate and John Olberding, who were both sponsored by American Legion Post 45, were among the 520 boys selected to participate in the American Legion Hoosier Boys State at Trine University. Founded in 1937, the organization is celebrating its 75th year.

They heard an inspirational message from Hall of Fame football coach and Trine trustee Lou Holtz on June 13. In addition, they met multiple local and state leaders throughout the week.

Taking the theme “A Week to Shape a Lifetime,” Boys State – a weeklong residential learning experience – examines the operation of Indiana’s democratic form of government, the organization of political parties and the practical application of the knowledge gained from both.

Holtz admitted he wasn’t a politician, but felt he could teach them a thing or two based on his years of experience as a winning coach, mentor and author. He offered advice on attitude, accomplishments, goals and commitment. His speech garnered him a standing ovation and an initiation as an honorary “Hoosier Boys Stater.”

“Leaders must have a vision,” Holtz told the crowd, encouraging them to figure out what’s important, have the right attitude and make good choices. “Our future is determined by the choices we make … Making good choices is critical. First, you’ve got to do right. Second, do everything to the best of your ability and then show people that you care.”

He encouraged the boys to set goals – in relationships, religion, finances, work and fun – and discussed adversity, calling it his most significant motivating factor. Overcoming obstacles is key to success, he said, emphasizing that “it will turn out to be OK in the end.”

“Leaders have an obligation to make people the best they can be,” said Holtz. “Be significant, not successful.”