You are at:Home»Current in Westfield»State of the Schools

Supt. Mark Keen explains the state of Westfield Washington Schools and where the district is headed 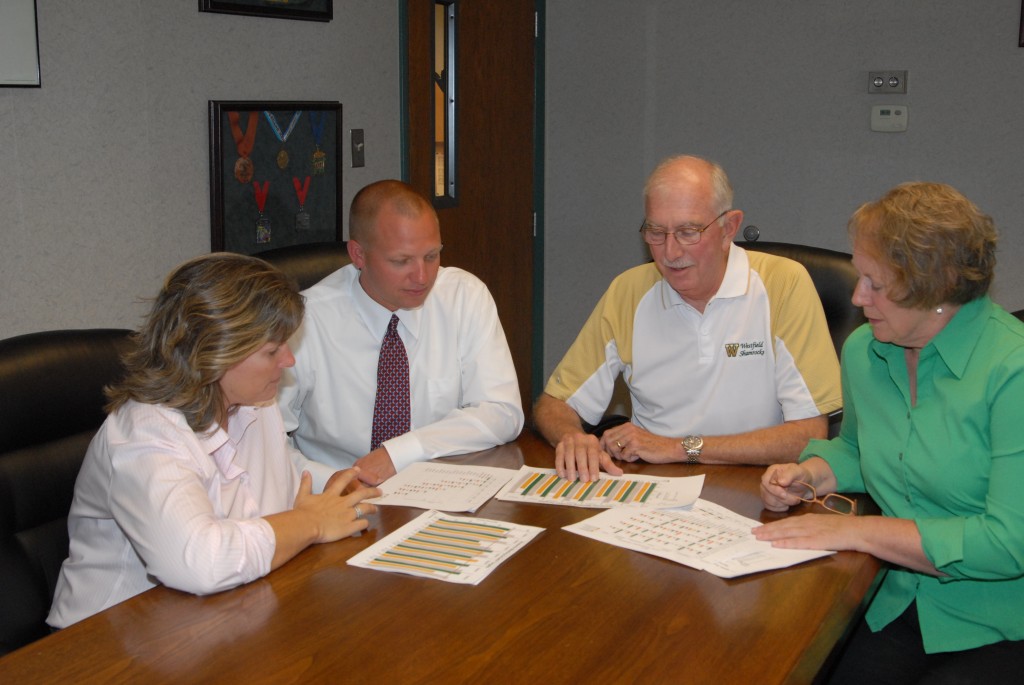 The achievement and rankings of Westfield Washington Schools is leaving other districts green with Shamrock envy. During his annual State of the Schools speech, Supt. Mark Keen summarized the exciting events taking place within the classroom and across the district, as well as, what’s on the horizon for the growing school corporation.

WWS was one of seven high-performing organizations (the only school corporation) named a recipient of the 2012 Awards for Excellence – Ohio, Indiana and West Virginia’s highest honor for performance excellence through innovation, improvement and visionary leadership. All of the applicants were evaluated rigorously by an independent board of examiners in seven areas defined by the Baldrige Criteria for Performance Excellence: leadership; strategic planning; customer focus;measurement, analysis and knowledge management; workforce focus; operations focus; and results.

Keen said the evaluation process for each of the recipients included about 1,000 hours of review and an on-site visit by a team of examiners to clarify questions and verify information in the applications.

The corporation was also selected as one of 12 leading-edge districts to share experiences, challenges and best practices for innovative uses of new media in K-12 education, as part of an initiative launched by the Consortium for School Networking. Keen said the award is for the use of technology within schools – not having but utilizing technology.

WWS is one of 16 districts from 13 states selected from over 50 applications to participate in the Closing the Gap: Turning Data into Action Community of Practice District Cohort.

“With Closing the Gap, schools are identified as doing a really good job using data from assessments. We find data very useful to use and adapt to instruction,” explained Keen. “WWS is the only district in the nation to be selected for both the Leading-Edge School District Cadre and the Closing the Gap CoP Cohort.”

This summer, 3,200 students participated in the district’s summer learning loss prevention program – twice the number of students in 2011. In all, Keen said this summer’s students completed 24,200 activities and teachers recognize a difference in preparedness levels.

“The program is helping our kids eliminate summer learning loss,” he stated. “Teachers are reporting kids are ready to go and ready to learn.”

Summer learning loss is a big problem teacher’s face each year. Keen said 25 percent of textbooks are review from the previous year – an equivalent of nine weeks of the school year. By removing the learning loss, teachers are able to skip ahead and provide more new instruction.

“In eight years that’s a year and a half worth of instruction without adding a minute to the day or a day in a year,” Keen said.

The district has been campaigning for two to three years but now that business is beginning to pick back up the focus on building a new community stadium has renewed. The new stadium would be located behind WHS adjacent to the soccer field. Keen said the reasons for a new stadium include more capacity for events, a safer environment for parking and pedestrians, and provide better supervision of attendees.

WWS is looking at naming rights for the stadium, field and press box as it looks to build the stadium without a single penny of taxpayer funds. Keen said if donations are made the new stadium could be playable in two years.

“If someone comes forward in the next 60 days with the right funds, we could potentially have it built before the end of the season next fall,” he said, adding the stadium would not be completely finished but would include stands, lights and one locker room. “Funds on hand would take care of the initial work.  Fundraising or sale of ground would complete the work.”

Keen said a new stadium is needed in order to sell ground where the present stadium sits – 14.1 acres at U.S. 31 and Ind. 32. Funds from the sale of acreage must be spent on capital projects.

“It’s the hottest intersection in Hamilton County,” said Keen, adding the district has spoken to Grand Junction planning and developers.

“These are community schools. We want the facility used year-round,” he said. “We’re calling it the community stadium not the high school stadium.”

Keen is working on three items that would not only impact Westfield but also other schools within Indiana.

1) A waiver to allow some blended courses. Keen said the district is looking at providing some high school courses that would not met every day or could be offered online.

“It’ll prepare kids for what they’ll see in college,” he said.

The potential change also frees up space within the building – one classroom can be used for two different classes so 50 students are utilizing one class instead of 25.

2) An exemption for high performing schools. Keen explained that the state DOE is really understaffed and cannot properly handle the paperwork and assessments of more than 300 state school districts. Along with a group of educators, Keen proposes that districts with a record of high performance should be relieved from a lot of mandates.

“They can concentrate on areas that need it,” he said of the IDOE. “Those that really exceed with the state standards get the reward to be left alone.”

3) State money for successful school districts. Keen said districts receive money for students who fail ISTEP+ to provide additional instruction. While he is not in favor of merit pay, Keen believes high achieving districts should be rewarded for their performance to further enhance the classroom experience.

“Instead of concentrating on poor schools doing better let’s try to reward success,” he said.