You are at:Home»Current in Carmel»Carmel Community»Grain elevator site ready for redevelopment 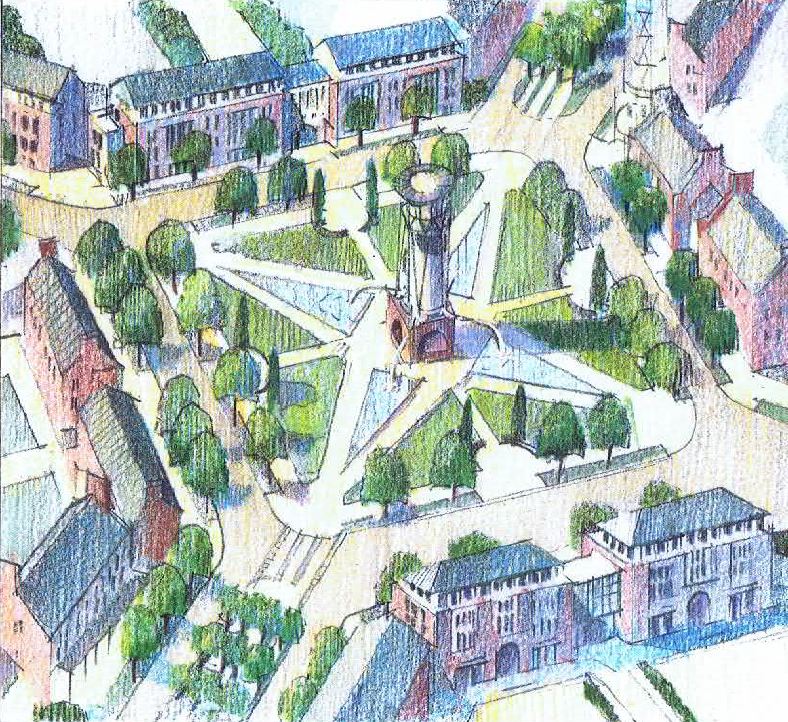 A rendering from the Speck and Associates report puts a new water tower at the center of a walking park. (Submitted illustration)

On Nov. 14, the Carmel Redevelopment Commission announced that clean-up procedures at the former grain elevator site were completed. The project started in April but experienced delays when professional demolition crews from Casey-Bertram discovered an unknown substance in the rubble. Tests by the Indiana Department of Environmental Management revealed the substance was non-hazardous and approved the completion of debris removal.

Casey-Bertram President Scott Casey said, “(This) project was completed per local, state and federal codes. All material was taken to appropriate landfills and documentation was provided to the customer (Carmel Redevelopment Commission.)”

“Cleaning up the grain elevator will allow the property to be put back on the tax rolls for the city because we can now sell it to a private company for redevelopment. We are very pleased to be able to offer the site to developers in a more shovel-ready form and to get the property back on the tax rolls for Carmel,” Heck said. “The City and the Carmel Redevelopment Commission have found more positive results from private sector investment when sites are ready for redevelopment.”

This area along the Monon Trail just south of the Arts and Design District is the focus of Carmel’s third development stage called Midtown. The city of Carmel and the Carmel Redevelopment Commission have been working with Speck and Associates to plan a pedestrian-friendly center to seamlessly connect Main Street with City Center.

A project report by Speck and Associates includes plans to replace the existing 250,000-gallon water tower with a 750,000-gallon tower. The report describes a tower no higher than the previous grain elevator but designed as the central architectural feature of a walking park with fountains. “As it lends value to surrounding properties, this feature should result in increased tax revenues that justify its cost,” the report stated. The report also recommends incorporating the existing Emergency Medical Services antenna and electrical substation to avoid relocation costs.