You are at:Home»Current in Carmel»Carmel Community»Debate over gas station at 146th Street and Gray Road continues 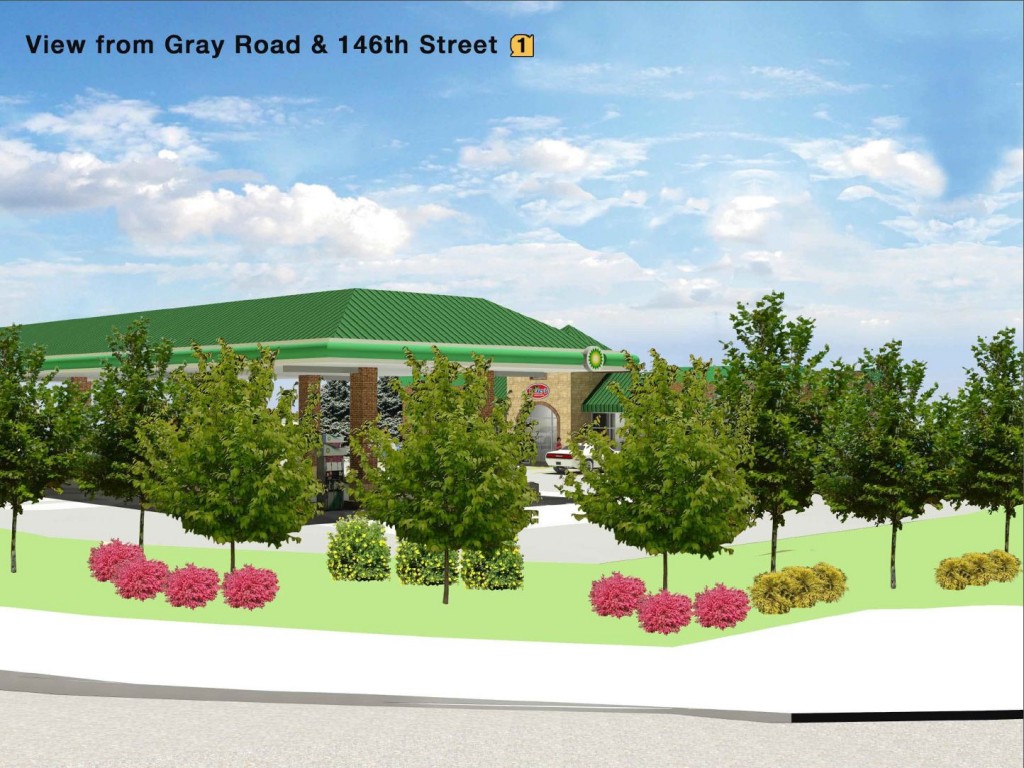 A view of the proposed Ricker’s gas station rom the intersection of 146th Street and Gray Road. (Submitted rendering)

Debate over development of the south east corner at 146th Street and Gray Road continued during the Carmel City Council’s first public hearing of the year.

Anderson-based developer L & Q Realty has requested rezoning 4.59 acres of land from residential to business. Rezoning would accommodate a proposed Ricker’s gas station and convenience store. Approximately seven acres would remain as residential and include a tree preservation and dry retention buffer for local residences.

“We think we may have created a new standard for buffering by creating a seven-and-a-half-acre preservation area,” Scimia said.

The proposal includes a number of commitments to increase the station’s neighborhood appeal. The building will be one story, faced with stone and brick. The total number of pumps has been decreased from 10 to eight.

Turning lanes are planned within the property and designed to prevent traffic buildup in the nearby intersection. Scimia stated city engineers predicted “a slight increase in traffic, but no adverse level of traffic change.”

In November, the special studies committee voted 3 to 1 in favor of Ricker’s proposal despite a petition of almost 200 signatures opposing it. In December, the planning commission voted 5 to 4 to forward the request to the city council.

Resident Steve Dauby said neighbors would approve an office development. “This is a fantastic (proposed) buffer,” Dauby said. “Now, an office in that corner would be great.”

Resident Steve Steiner announced Ricker’s safety record included not only trash violations but crime. He stated that 6 percent of all robberies occur at convenience stores. In September, a police officer interrupted the robbery of a Ricker’s in Lawrence.

“This is Carmel,” Mauwen said. “It’s a slap in the face to the civil servants of this community to think that there’s going to be crime at a gas station.”

Attorney Scimia insisted the proposal “fits the City’s desired character for new development.” However, the city’s C3 Plan 2009, which is a comprehensive plan that establishes what can and cannot be built on a piece of land, does not address 146th Street or Gray Road in its list of seven “critical corridors.”

“This property has been subject to several prior rezoning requests,” Scimia explained. Proposals have ranged from small office and retail complexes to multi-family condos. “Something’s going to have to be developed here sooner or later,” he said.

The ordinance was assigned to the Land Use, Annexation & Economic Development Committee to be discussed at its Jan. 22 meeting.