You are at:Home»Current in Carmel»Carmel Community»Gas station proposal withdrawn for 146th and Gray 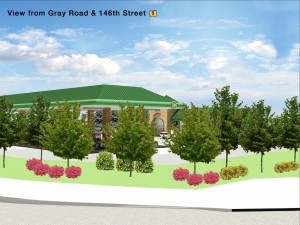 A view of the originally proposed Ricker’s gas station rom the intersection of 146th Street and Gray Road. (Submitted rendering)

Ricker Oil Company officially withdrew their proposal for a convenience store and gas station at 146th and Gray Road in Carmel yesterday. Ricker’s had been awaiting city approval to rezone the site for a commercial development that included a seven-acre buffer from neighboring residents.

At the Jan. 7 city council public hearing, several residents of Woodfield subdivision and adjacent properties requested a rejection of the rezoning. They expressed concerns that the development would decrease road safety, water quality and property values.

The proposal was scheduled for discussion at the Jan. 22 Land Use,Annexation and Economic Development committee meeting, but on Jan. 18, Ricker’s requested the committee place the proposal on hold.

“Based upon the numerous favorable emails that I have received,” Turrin stated, “I believe that (the residents) are pleased.”

Jay Ricker, founder of Ricker Oil, explained, “They really didn’t want it there, so we made the decision not to go further with it.”

“City of Carmel officials, commissions and staff were all extremely helpful with this process,” Ricker stated. “The neighbors presented their concerns in a valid and a business-like way. While we disagreed, everyone did so in a very professional manner.” 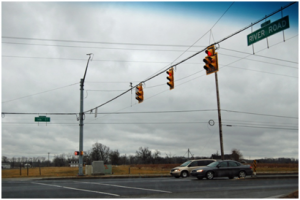 The proposed site at 146th and River Rd.

Ricker Oil Company plans on submitting a proposal for a similar convenience store at the corner of 146th and River Road.

“I think this may be the best way to move forward for everyone concerned,” said Ricker. “We want to be a good neighbor.”

The new proposal will be submitted soon and will include a similar building with quality brick and stone and an enhanced pump canopy.

“It won’t just be a flat, ugly canopy,” Ricker said. “It will be an attractive one with brick and stone columns.”

“We think it will be harmonious with what Carmel is trying to provide as far as architecture on commercial businesses,” he stated. “We’ve been told that one of the biggest retail businesses the neighbors of the (River Road) location want is a convenience store.”

The intersection at 146th and River Road already includes traffic lights and turn lanes. The proposed site is about one mile north of the new Ryland Homes development and Prairie Trace Elementary School.

Land Use Committee Chairman Eric Seidensticker confirmed this site is already zoned for a convenience store but expressed concerns for the water supply.

He pointed out that evaluation of the new proposal will require balancing the reward of the convenience store with the risk of water contamination.  “My concern,” Seidensticker stated, “is the proximity of the underground gas storage tanks to our wellhead protection area.”