You are at:Home»Current in Zionsville»A new Cuba is coming, quickly 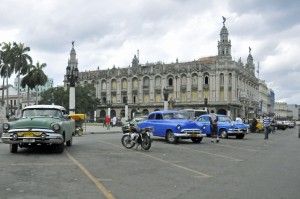 My wife and I recently visited Cuba as part of a U.S. government licensed “people-to-people” group.  As expected, we found a country in which the clocks seem to have stopped in about 1959.  But we also found a country moving inexorably toward a more entrepreneurial and open future.

The most common reminders of a bygone era are the thousands of pre-Revolution Chevrolets and other now-classic American cars, kept running by resourceful mechanics and now the country’s favorite taxis.  Equally well-preserved members of the Buena Vista Social Club perform in Havana’s famous National Hotel, popular with Russian diplomats and featuring a statue of a young Nat King Cole.  Pictures of Che Guevara in battle fatigues are everywhere and Cuba’s ubiquitous guitar players apparently think that Americans’ current hit is “My Way.”   Havana’s smoky refinery and polluted harbors recall a time before environmental awareness.

But it is a mistake to see Cuba only in terms of such backward-looking images, powerful as they are.  More than 50 years after the Revolution, a new Cuba is emerging.   Now free to start businesses and keep the profits, more than 250,000 Cubans are providing everything from taxi services in the family car to street corner food from push carts imported from Costa Rica.  Restaurants in converted Cuban homes, their menus reviewed in the New York Times, draw sophisticated guests from all over the world.  Dozens of farm co-operatives, renting land from the government but sharing their profits among members, are demonstrating how productive Cuban agriculture can be given incentives to be efficient and imaginative.  Members of a neighborhood cooperative sell quality artwork inside an abandoned water tower, using some of the proceeds to rejuvenate their neighborhood.  A unique semi-autonomous agency, allowed to retain profits from its hotels, tour guides and other tourist services, is restoring collapsing buildings in Havana’s Old City to their colonial grandeur.  And in January, all foreign travel restrictions on Cuban citizens were eliminated, giving them a leg up on Americans whose unauthorized travel to Cuba is illegal.

The young people with whom we spoke are in favor of these changes, which they see as providing a chance for a better life.  But like their parents, they fear that a more entrepreneurial society will put at risk the free education and health care and the profound sense of national unity Cubans cherish.  Recognizing this risk, the government is loosening the restrictions gradually, but free enterprise is contagious.  It won’t be long before Havana has its first fast food restaurant and a Starbucks on every corner can’t be that far away.  If you want to see Cuba before it loses its gritty nostalgic appeal, you had better hurry.