You are at:Home»Current in Zionsville»Ugarit helped rewrite Bible 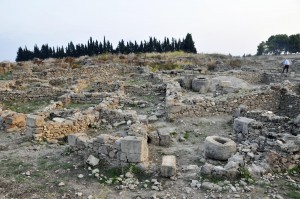 In 1928, a Syrian farmer stumbled into a tomb near the modern Mediterranean coastal city of Litakia, which has seen some of the fighting in the Syria civil war.  The tomb was part of the ancient Canaanite city of Ugarit, one of the most important cities in the western world from about 1500 to 1200 BC, a time period that coincides with the oldest stories in the Bible.   The excavation of Ugarit led not only to a revision of history but to a literal rewriting of the Bible.

Archaeologists digging at Ugarit found a tablet about the size of a finger containing thirty unique characters, one for each day of the lunar month, originally formed in wet clay with a wedge-ended stick.  Although the writing instrument was the same as that used in other forms of cuneiform writing, the characters were not.  Instead, each character represented a unique vocal sound and could be strung together with other characters to create words.  Until this discovery, the invention of the alphabet had been attributed to the Phoenicians, who lived further down the coast and about 500 years later.  Today the tablet from Ugarit containing the first alphabet is on display in the National Museum in Damascus.

The Ugarit excavators also found the ruins of a temple, once visible from the Mediterranean.   About 5,000 clay tablets, written in a language similar to Hebrew, told stories of the Canaanite storm god named Ba’al worshipped in this temple.   Those tablets also told stories of Ba’al’s father, the supreme god El, and Asherah, El’s consort.

Biblical scholars quickly recognized the significance of these finds.  Ba’al was the god that the Hebrew prophets feared was seducing the people of Israel and leading them away from Yahweh, the God of the Bible.   Ugaritic tales of Ba’al’s heroic sexual activities helped put those concerns in context.  And the Ugarit tablets cleared up a great Bible mystery.   The English translators of the King James Bible did not know the meaning of “Asherah” and somehow decided to translate it as a “grove,” leading to incomprehensible statements about burning “vessels that were made for Baal, and for the grove.”   Relying on the discoveries at Ugarit, modern translations, including the “New King James Bible,” simply use the name “Asherah,” noting that she was a Canaanite goddess.

The temple of Ba’al can still be seen in Ugarit, along with boat anchors left by sailors grateful for steady winds and calm seas.  Statues of El and Ba’al found among the Ugarit ruins are now in Syrian museums.  And the fertility goddess Asherah again has her rightful place in the Bible.