You are at:Home»Current in Zionsville»ZCHS show choirs top the charts 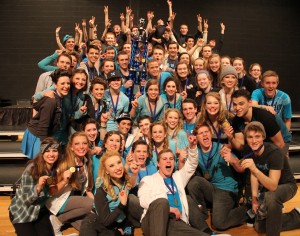 The Zionsville Community High School show choirs, Choralaires and Royalaires, have earned the title Grand Champions early in their competition season at the Best of the Midwest Show Choir competition at Center Grove High School and also at the Franklin Central Hoosier Show Choir Competition.

The Choralaires and Royalaires are co-directed by Aaron Coates and Deana Broge, both teachers at ZCHS. Coates is also the head of the music department and Broge teaches choir. Together, they have collaborated and lead the two show choirs for the last four years.

“Our philosophy is for all of the students to demonstrate leadership by example,” Coates said. “Our students give their best and pay close attention to as many performance details as possible. This is a group of great kids who work very well together and they accept the challenge to do their best.”

Coates also praised the parents and staff who support the programs and attributes their contributions as part of their success.

The show choirs will be traveling to Ohio on Saturday, for their first out of state competition. For information on the Choralaires and Royalaires and their season finale, visit their website at www.zchoirs.com.