You are at:Home»Current in Zionsville»Lessons for all in Gadara 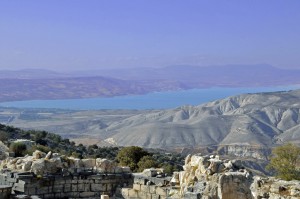 Sea of Galilee from Gadera (photo by Don Knebel)

In one of the stranger stories in the New Testament, Jesus drove evil sprits from a man so tormented by them that not even chains could restrain him.  The evil spirits then went into 2000 pigs, causing them to rush down a steep bank into the lake below, where they all drowned.   Although the Bible does not unambiguously indicate where this story took place, the most likely spot is near the well-excavated ruins of Gadara in extreme northwestern Jordan, 2000 feet above the Sea of Galilee.  Looking down from the ruins today it is easy to visualize the path the pigs took to their deaths.

Gadara was one of ten Greco-Roman cities constituting the “Decapolis.”  The ruins show that first century life in Gadara was much different from life in the Jewish areas nearby.  Citizens attended the now reconstructed theatre and shopped along the colonnaded main street still showing the ruts formed by Roman chariot wheels.  Men bathed in the nude in the pubic baths.  And, of course, unlike their Jewish neighbors, the residents of Gadara ate plenty of pork, which explains why so many pigs were nearby when Jesus drove the demons from the man they were tormenting.

According to the Bible, the man Jesus cured of his demons was so happy to be able to live a normal life that he went into the Decapolis, spreading his good news.  The first Decapolis city he reached was probably Hippos, perched on a hilltop on the eastern shore of the Sea of Galilee.  Scholars believe that Hippos, with its marble temples to Zeus and Aphrodite visible from the Jewish towns along the northwestern shore, was the famous “city set on a hill” that Jesus said could not be hidden.  Ironically, this image of a pagan city was used 1600 years later by Puritan John Winthrop as a symbol of Christian purity.  Traveling a few miles south of Galilee on the ancient road to Jerusalem, the man from Gadara would have come to Scythopolis, the capital of the Decapolis.  Visitors today can explore its meticulously restored theatre, baths and temples, as well as the nearby excavation of Beth She’an, on whose walls the victorious Philistines hung the headless body of Saul, Israel’s first king.

On a clear day in Gadara, it is possible to see the modern countries of Jordan, Syria, Israel and Lebanon.  It is also possible to imagine Jesus and his Jewish followers crossing the Sea of Galilee from their base in Capernaum, climbing the steep hill to Gadara’s alien culture and, without preconditions, helping a man holding religious beliefs far different from their own.  There are lessons for all of us in Gadara.