You are at:Home»Current in Zionsville»Landscaper wins best in show 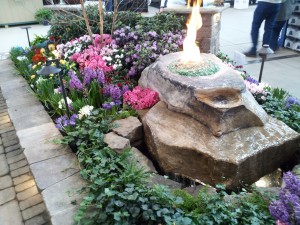 Perkins Landscaping in Zionsville recently flexed their green thumb to win Best in Show at the Indiana Flower and Patio Show in March, an award they have won two out of the last three years.

The show began in 1958 as a way for landscapers and gardeners across Indiana to showcase their work and cutting-edge ideas to their industry peers and the public alike. This year, 41 exhibitors participated in the week-long event, competing in either the garden or booth categories.

Perkins chose to enter in the booth category, sharing the space with Fishers-based outdoor lighting company Heinzman Lights at Night. The design and execution of the space was the brainchild of Perkins Landscaping owner Mike Cline. Cline said that Heinzman Lights at Night owner Mark Heinzman and two others helped create the outdoor, garden-like space which included a variety of plans, colorful flowers and a fire boulder fountain. In total, the installation took about a week to complete.

Cline said it was a great way to reach a diverse group of people and to show the 125,000 attendees what his company does best.

“We do full landscape design, installation and maintenance, which differs us from some of our competitors. Since we do maintenance, we see how plants grow over time. We also have experience maintaining large estates and managed Ruth Lily’s for 37 years before she died,” Cline said.

Cline, who has worked in landscaping since 1976 and purchased Perkins Landscaping in the early ‘90s, said that landscapers in the area get along well, and it feels great to be recognized by his peers.

“It’s nice to know when other people recognize the hard work that you do. To me that’s the best feeling. We know we do quality work, but it feels good when someone else pats you on the back and presents you with an award,” he said.