You are at:Home»Current in Zionsville»The water of the sea 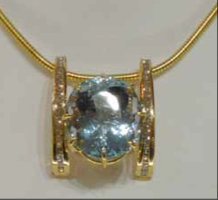 All gemstones have legends attached to them, and the March birthstone,

aquamarine, is no exception. The word aquamarine means water of the sea, from the Latin, so ancient sailors always carried an aquamarine amulet on voyages to protect themselves from Triton/Neptune/Poseidon, a particularly irritable sea god who delighted in stirring up storms, sinking ships and drowning sailors.

Romantically, aquamarine is linked with love and a happy family life. From Roman times, aqua has been exchanged by newly-weds. It is a symbol of friendship and eloquence, and being a blue gem, is considered calming and soothing. It was believed that aquamarine would improve eyesight, relieve stomach pain, alleviate toothaches, strengthen the heart, and help lungs, skin and the nervous system.

The blue of aquamarine is caused by iron and can vary from “just barely” there to deep Mediterranean blue. Of course, the deeper and finer the blue the higher the price – deep blue gem-quality aquamarine is not cheap. Deposits of this blue member of the beryl family can be found on every continent, but the largest deposits are located in Brazil. Large crystals are not uncommon. The largest gem quality crystal was found in Brazil (Minas Gerais) in 1910. Weighing in at 243 pounds, it produced more than 220,000 faceted aquamarines. Now, that’s a heck of a lot of seawater.

Susan Schube is a bench-trained jewelry designer and owner of Avalon Jewelers/Gallery on Main Street in Zionsville. She can be reached at susan@avalonjewelers-gallery.com.