The Veteran’s Memorial is in dire need of repairs 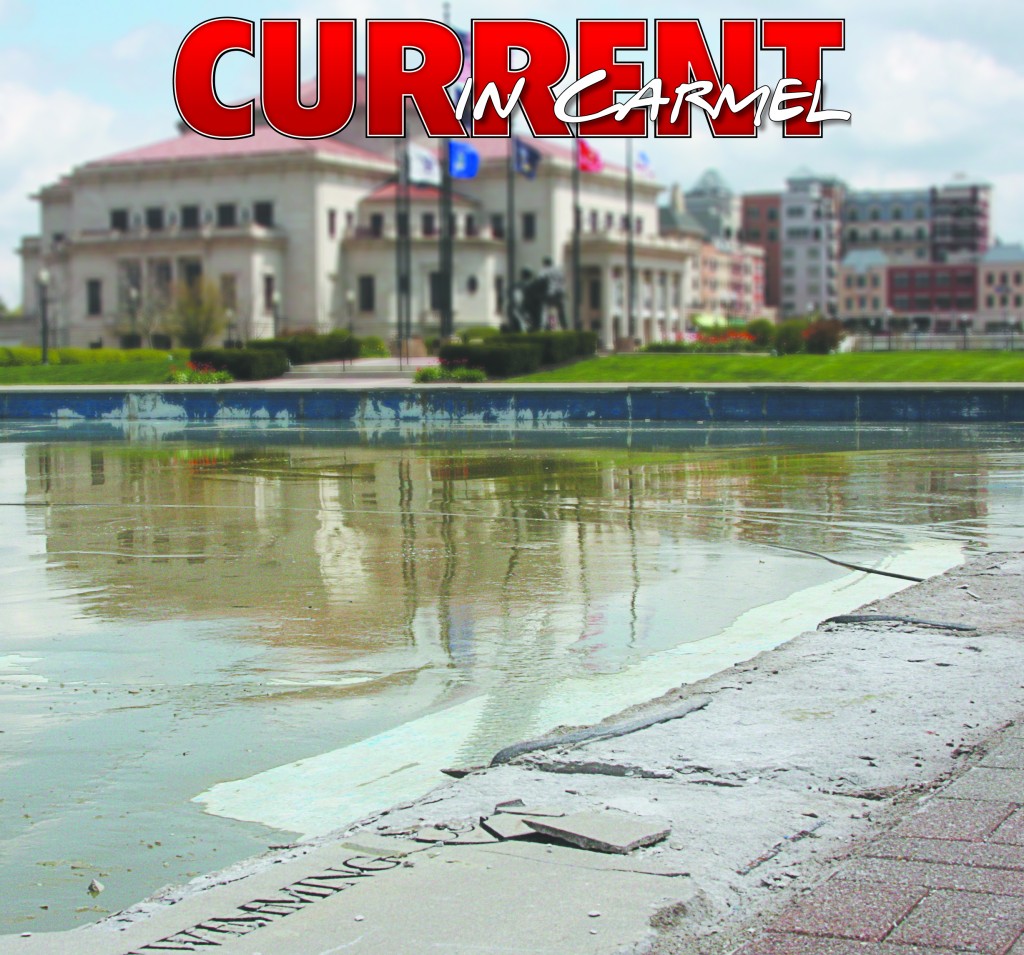 The Veteran’s Memorial reflecting pool at City Center will likely get a much-needed facelift sometime this year.

Ten years after it was completed, the concrete coping at the edge of the pool has already begun to crumble. Residents have been complaining about the reflecting pool’s condition for months, but those concerns have only been publicly aired within the last few weeks. 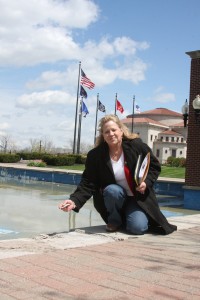 Kathy Wallace picks up a pieces of the crumbling pool ledge. (Photos by Robert Annis)

City spokeswoman Nancy Heck said the fountain’s official owner, the Carmel Redevelopment Commission, is coordinating repairs to the reflecting pool which will replace the concrete around the edge with granite. The project has yet to go to bid and no timeline for completion is available. It’s not yet known how much the repair work will cost.

As a matter of routine maintenance, the street department is draining the 1.5 million gallon reflecting pool and will clean, repaint and refill the pool in the coming weeks.

Kathy Wallace, who has spearheaded citizen calls to fix the pool, called its current condition an “embarrassment” to veterans.

“My family has had veterans in every war,” Wallace said. “When we were walking by the other day, my 18-year-old son said to me, ‘It’s a shame this is how we honor our veterans.’ It’s a pride thing. It’s a shame it’s happened. Whether it’s a poor design or a poor choice of materials, it needs to be fixed.”

City Councilor Eric Seidensticker said the coping, a cast simulation of limestone, was improperly installed when the pool was built in 2003.

“It started leaking like a crazy (almost immediately),” Seidensticker said. “The report shows it wasn’t properly cemented underneath. The company that did it had never installed it in the field before.”

Eden Enterprises was the general contractor for the reflecting pool, but it subsequently filed bankruptcy and closed. In 2003, one of Eden’s suppliers threatened to file a lien against the reflecting pool due to unpaid payments from Eden, but wasn’t able to follow through because of rules regarding public spaces. In the minutes from the Feb. 12, 2003 CRC meeting, attorney Karl Haas referenced other issues with Eden, “so we need to be careful not to pay them.”

A serious leak was diagnosed early on and finally fixed in 2009.

Stan Schultz, Eden Enterprises’ former principal, was not able to be contacted.

The pool has been plagued with problems since even before its construction. Eden Enterprises submitted the winning $1.5-million bid in 2001, slightly less than CSO Architects’ estimate, but later rescinded its bid, which was $200,000 lower than planned. The company would win the second round of bidding as well – much to the city’s later chagrin.

Both Seidensticker and Wallace say money in the city’s budget needs to be earmarked for routine maintenance needs for the reflecting pool and myriads of other projects around the city. The city is sifting through its 2013 budget to find additional savings for other projects.

“I get the impression this is something the city wants to fix,” Wallace said. “They want this (pool) to be something we can all be proud of.”

After the repair work is eventually completed, Wallace plans to contact local veterans groups for a reopening celebration.

Is the city doing a good job of keeping up with maintenance of its most important infrastructure? What are the areas of Carmel most in need of repair? Tweet locations and photos of city-owned infrastructure that you think need refurbishing with the hashtag #FixMeCarmel.