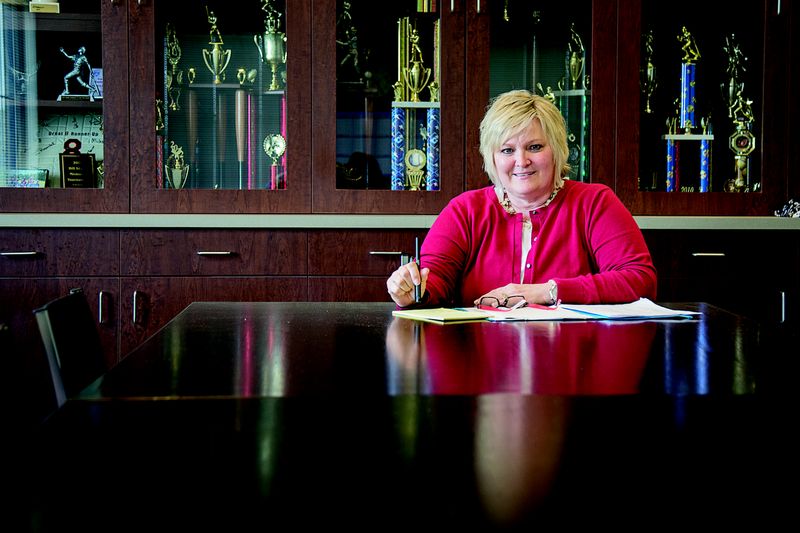 If you’re not one of the thousands of parents in Fishers with a child in one of its leagues, the Southeastern Program of Recreational Team Sports is an overarching not-for-profit that governs athletic opportunities to local children and teens.

With Fishers on-the-rise, the years-old organization has steadily grown.

Just 13-and-a-half years ago, the culture of S.P.O.R.T.S. was quite different.

Executive Director Lynda Carlino, who started leading the organization at that time, recalls a system in which information for some leagues was a shoe box sitting in the garage somewhere.

At that point, there was no real bookkeeper, and, like the iconic, little towns that still jut out of Indiana’s gigantic, sprawling corn fields, everyone knew everybody or at least  knew of them.

Last year, 11,705 participants – counting kids more than once if they play multiple sports – make up the collective made possible by what Carlino estimates to be 4,000 volunteers, as well as S.P.O.R.T.S. staffers and the organizations they work with.

She said the majority of the coaches are volunteers, but some leagues have stipends.

During the program’s growth, Carlino said parents have stepped up and learned to make sporting opportunities like rugby and lacrosse happen.

“It’s been fun to see all of that grow and what can come of it,” she said.

And, as the program has grown and evolved, the needs have changed.

The insurer for S.P.O.R.T.S. requires concussion-testing training for all coaches, S.P.O.R.T.S. plans to bring a motivational speaker in to talk about bullying, and recreational activities for the kids who don’t make the cut in middle school and high school are progressing.

All the while, finding facilities for everyone has become a “crazy” task and an overarching scheduling system is being worked on, according to Carlino.

Carlino, other S.P.O.R.T.S. employees and volunteers have to deal with problems like three teams showing up to use the same athletic field.

It leads to hours upon hours of work for the many that are involved.

And with complications like field mix-ups comes frustrated parents.

Janet Berg, a volunteer coach, Youth Volleyball president and S.P.O.R.T.S. board member, has had multiple kids participate in S.P.O.R.T.S. programs.

She said aspects of S.P.O.R.T.S. can be frustrating to parents because most do not have the background information on what the organization does and experiences. It was one of the reasons she became involved.

She said the employees at the not-for-profit do a “fabulous job” and urges parents to get more involved.

Carlino said difficult parents are “few and far between,” but can be one of the organization’s biggest challenges.

“For the most part, people in Fishers are really, really good and positive,” she said.

But without places to play, the not-for-profit’s leagues wouldn’t be possible.

Carlino credits the Hamilton Southeastern School District and the Town of Fishers for building high-quality athletic facilities in town, two organizations the not-for-profit regularly works with.

Individual leagues contribute and fund projects around town to the tune of thousands of dollars, according to numbers provided by Carlino.

Included in those projects bank-rolled by the leagues are lights at Mudsock Fields ($200,000) and the eighth diamond at Billaricay Park ($75,000), but the list is quite extensive.

“It’s a just great concept of a private-public partnership, because it works so well,” Carlino said.

Ultimately, the people make sports what it is.

“It’s really important it’s the volunteer base that does it, because then they do take an ownership into it,” Carlino said. “There’s no way any of what we do could be done without the volunteers… We also couldn’t do it without the town.”

“There is always the need for more (volunteers).”