You are at:Home»Current in Westfield»Ameriana Bank to host 2013 Marketplace at Westfield 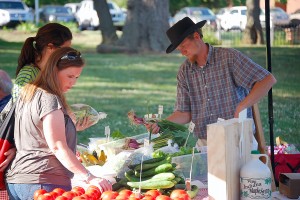 Westfield residents will be able to shop for local produce and homemade goods this summer after a local business stepped up to provide an alternative location for a canceled annual tradition.

In the absence of the 2013 Westfield Farmers Market, Ameriana Bank Manager Rob Garrett announced that the banking center will host the inaugural 2013 Marketplace at Westfield beginning June 14.

“We’ve always enjoyed being a part of the Farmers Market, both as sponsors and patrons. We couldn’t imagine a Westfield summer without it, so when we heard the news of its cancellation, we wanted to do something to keep it alive in our community,” said Garrett.

Garrett invited the vendors who were previously committed to the Westfield Farmers Market to set up in the bank’s parking lot at 3333 E. Ind. 32 at Carey Road. The Marketplace will be held at the same time as the market was scheduled – 5 to 8 p.m. Fridays from June 14 through Sept. 27. Garrett said the market will be held after the bank closes so it is not expected to impact any customers.

“We’re not replacing it. We wanted to provide an opportunity to keep the market going this summer,” Garrett said. “We did not want to step on anybody’s toes so we talked with the city and Downtown Westfield Association. Everyone was very, very supportive.”

The decision to cancel the 2013 Westfield Farmers Market was made last month. The DWA said a decline in vendor numbers and the construction taking place along U.S. 31 and in downtown Westfield were the primary causes for the cancelation of the market’s sixth season.

“The stars were not aligning for the market this year,” said city spokeswoman Carrie Cason. “We knew the attendance would be down because of construction. Vendors want to have attendance, or they won’t come back.”

Garrett said it’s not his intention to provide a competing market but a temporary fix while the DWA reevaluates its market plans for the future.

“We changed the name so there wouldn’t be any confusion,” he said. “I’m a bank not a farmers market.”

Ameriana is in communication with the vendors slated to be at this season’s farmers market and knows that 20 of the 35 booths plan to attend the new location. The bank is providing the space for Marketplace at no cost to the vendors, and admission is free.

“We don’t have a lot of room for anyone to show up. We’re trying to keep it simple and offer space to the farmers market vendors,” Garrett said.

Ameriana recently celebrated its fourth year in Westfield. Since it opened in 2009, Garrett said the bank’s intention was to root itself within the community

“We are not the only bank in Westfield. A way to distinguish our self was to get involved and show support for other local businesses and non profits who help Westfield succeed too,” he said. “We try to give back as much as we can. It’s more than just a bank, we really want to help the community try to become a better place.”

For more information about the 2013 Marketplace at Westfield, visit www.ameriana.com, www.facebook.com/amerianabank
or call 867-7740.