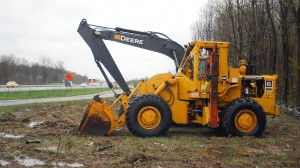 U.S. 31 construction is scheduled to be finished in Westfield in 2015. (Photo by Robert Herrington)

The federal government will pay for a larger share of U.S. 31 improvements in Hamilton County, allowing the state to save $23 million. U.S. Transportation Secretary Ray LaHood approved increasing the federally-funded share for the U.S. 31 Hamilton County Improvement Project to 90 percent from 80 percent on June 25.

The U.S. Transportation Dept. said the project is the first to benefit from a new provision in highway legislation that gives the agency discretion to increase the allowable federal match on eligible critical freight projects.

“Freight movement is critical to building a strong economy, and we support Indiana’s commitment to this very important project,” LaHood said. “New flexibilities in Moving Ahead for Progress in the 21st Century will make it easier for all states to move important freight projects forward.”

The U.S. 31 project is part of a larger Indianapolis to South Bend corridor INDOT is rebuilding to handle increasing traffic, including more than 6,600 trucks using the corridor each day. The increased federal share will allow INDOT to use $207 million in federal dollars toward the total project cost of $230 million.

“The U.S. 31 project will relieve congestion and allow area residents to spend less time in traffic and more time doing what they enjoy, and it will also reduce the time it takes to deliver merchandise,” Victor Mendez, administrator of the Federal Highway Administration, said. “It’s a win-win-win for residents, businesses and commerce.”