You are at:Home»Current in Westfield»Summer plans must consider restrictions 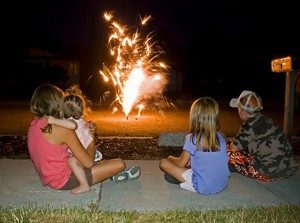 Personal fireworks can only be set off on private property and at certain time and dates in Westfield.

As families prepare their celebration plans, they will have to do so with Westfield’s new stricter fireworks restrictions in mind.

In April, the Westfield City Council approved a new ordinance prohibiting fireworks within Westfield at all times and locations with the exception of the following:

■ Any other time and location duly authorized by the City of Westfield by permit to be obtained before the scheduled event.

The ordinance is not exclusive to noise makers.

Previously, the police department was unsuccessful using the noise ordinance to handle complaints. Westfield Police Chief Joel Rush said this ordinance provides his officers with the ability to issue citations to city court.

“We didn’t have the ability to do that before. There was nothing we could do,” he said.

According to the ordinance, “violations shall be punished by a fine of no more than $500 per incident as well as other penalty provided by the Westfield Code of Ordinances.”

While the burn ban last summer significantly reduced the number of complaints, Rush said summertime is when the police department receives the most calls from the public.

“More so when school starts,” he said. “It gets darker earlier, and kids are in bed.”