You are at:Home»Current in Fishers»Sandstone homes ravaged by fire 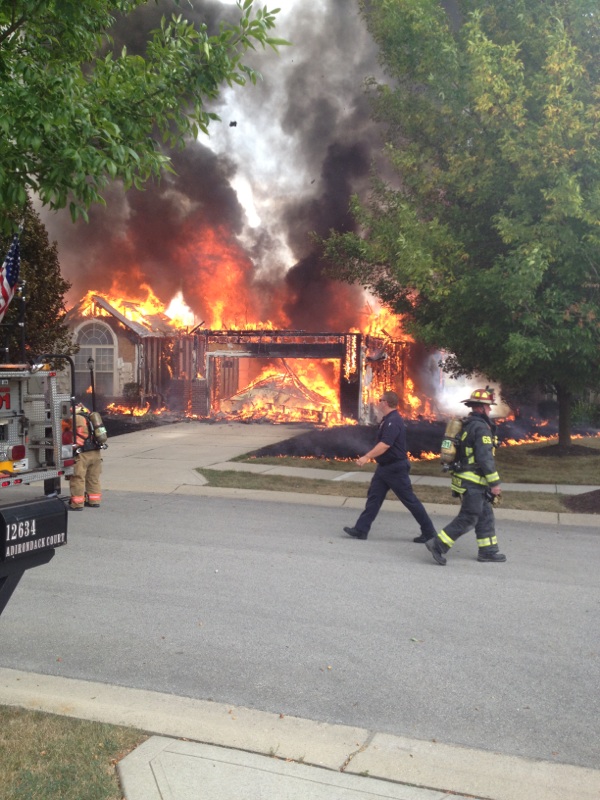 Three adjacent homes were ravaged by fire earlier this afternoon in the Sandstone Village subdivision.

No one living in the homes was injured; however, two FFD firefighters suffered minor burns.

FFD was called out to the fire at 2:07 p.m. and arrived to the fire with the center being at 12635 Adirondack Court.

The fire spread to the homes east and west of it.

Dee Matthews, FFD spokeswoman, said the homeowner there heard the fire alarm, saw smoke and flames and left the home. His wife and two children were not home at the time.

Neighbor Stefanie Jeffers, 42, said she heard someone yell fire and saw it from her back windows and went to alert those in danger.

She said she saw the man leave his home with his dog. She then went to the next house over and banged on the door to get Linda Davis, 69, and her dog out of the home.

Davis said she felt devastated and would be staying at a friend’s home in the future.

Jeffers said the resident and her children at the third residence involved were not at home at the time of the fire.

Matthews said the origin of the fire was unknown.

The investigation was still ongoing after 5 p.m.

One witness, Gavin Lehmann, 19, said he could see black smoke from a few miles away and had to pull over on his way back from school to let police and fire vehicles by.

He said he saw one of the roof’s collapse.

Noblesville resident Justin Owens, 34, and Indianapolis resident, Jake Parrish, 33, were returning from a break from painting a house a couple streets down.

Owens said they saw the smoke and decided to check it out.

He said the middle home started burning quick and it then spread.

Owens and Parrish found out that animals were left in one home.

They said emergency personnel arrived, busted the door down and handed two dogs to them and then yelled for them to get out of the area.

The house was already on fire.

Jeffers said, “I’ve never seen anything go so quickly as the fire spread from just home to home – very unreal.”

This story will be updated as more information becomes available.