You are at:Home»Current in Fishers»Excitement in the wild blue yonder 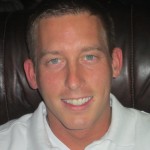 The elation of flying for a living is a dream come true for Chayse Baldwin.

When Baldwin, 29, was in sixth grade, his dad enrolled him in the EEA Young Eagles. The program, launched in 1992, gives interested young people from the ages of 8 to 17 a chance to fly in a general aviation plane.

Baldwin never forgot the thrill of his first plane ride, yet when he decided on a career he chose to attend Purdue University to study architecture. The journey to school was a safe 45 minutes from his home in Kokomo. He eventually “found architecture boring,” and decided to join the Air Force.

“Flying is a better route; there’s always more excitement,” Baldwin said. “When I get to fly it’s a privilege. I get to enjoy countries all around the world that I might not get to see otherwise.”

Some days the reservist will find himself in Sydney, Austrailia; other times he’ll be exploring parts of Europe.

Though the job may sound glamorous, his schedule can be grueling. The self-titled “workaholic” can be scheduled at a base for up to 24 hours per day. Working 25 days a month is common. Weekends and holidays, which most people get to enjoy with friends and families, are missed.

Yet Baldwin takes advantage of what little free time he has. He recently proposed to his girlfriend, Amy, who he started seeing right before he went into pilot training in Columbus, Miss.

When plans to propose during a hot air balloon ride fell through, Baldwin chose the romantic downtown canal to pop the question. Not surprisingly, the couple plan to fly overseas for their honeymoon.

“It would be nice to see my friends in Belgium again,” he said.