You are at:Home»Current in Carmel»Carmel Cover Stories»Can you put a price tag on Brookshire?

The City of Carmel is looking for a way to sell Brookshire Golf Course to Carmel Clay Parks and Recreation in the hopes of recouping the $2.6 million that the Carmel Redevelopment Commission paid for the course in 2006.

But the proposal put forward by Mayor Jim Brainard must first gain the approval of the parks board, the Carmel City Council and the Clay Township Board. And that’s not to mention the need for Brainard to explain why it has any value at all considering the golf course has required more than $2 million in city subsidies to cover its operational losses since the city purchased it.

“Parks don’t make money generally,” Brainard said. “Most cities that own a golf course, it’s operated by the parks department.”

He attributed much of Brookshire’s early losses to necessary capital expenses the city made to improve the clubhouse, the air conditioning system and the irrigation systems, not to mention necessary mold removal, the purchase of new golf carts and various course improvements.

“Very shortly it will be able to break even,” he said.

And Carter said it’s not going to be converted for another purpose.

“It’s going to continue to operate as a golf course,” he said, noting that a change in use would devalue the land of the surrounding subdivision.

The prospect of redevelopment is the reason the mayor cited as impetus for the CRC’s decision to purchase the course, noting a proposal for a gas station at 116th Street and Gray Road and the threat of the former owners to close the course.

But the majority of the course – with the exception of the clubhouse, two holes and the driving range – lays in a floodplain, and residential construction would be prohibited by the Flood Control Act, said Indiana Department of Natural Resources spokesperson Marty Benson.

And it’s complexities like these that the parks board will consider before it makes a decision on whether to purchase and operate the course. But to help it make an informed decision, the parks board hired Golf Convergence to conduct a feasibility study on the subject. 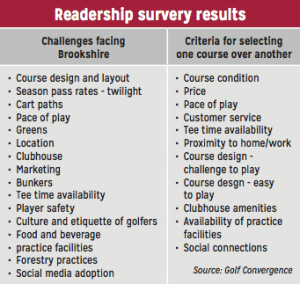 He noted that the average city golf course has a cash flow of about $142,000, and that the numbers remain low simply because the supply of golf courses exceeds demand from players by an average of 10 percent across the country.

He also said an abundance of spring rain or a lack of mild days in the summer can decimate any golf course’s profitability.

And while Keegan’s feasibility study is not yet complete, Assistant Parks Director Michael Klitzing was able to release the results of the study’s public opinion survey that had more than 1,000 respondents.

When asked who should own and operate Brookshire, 47 percent of people said they didn’t care, 31 percent favored the parks department and 22 percent favored city management.

Another interesting fact was that almost 40 percent of people said the city should help subsidize the course’s operating expenses because it was a vital city resource; only about 27 percent said it should be self-supporting.

The survey results indicated that the public thought Brookshire’s use should be targeted at pay-as-you-go recreational golfers, and that the majority of its users intended to play a wide variety of other courses throughout the year.

But the issue of purchasing an ongoing expense like Brookshire is likely to weigh most on the park board members’ minds when they have to make a decision on the issue.

“I do believe the city council has observed how (the Monon Center) has been run,” Parks Board President Jim Engledow said. “I believe they may see the wisdom in that falling in the auspices of the parks department.”

Engledow also said he didn’t see the advantage of the parks department paying to own and manage the course, noting that other scheduled park improvements likely would come to a standstill for years.

“I would hate to see that get in the way of the progress that we’ve made,” he said.

Members of the township board all expressed an interest in waiting for the results of the feasibility study before formulating a position on the matter — likely because they have the most at stake.

They all face a primary election in May of 2014 and their decision on this subject could play a role in that election.

That’s because the township manages a fund that collects more than $2 million per year in county option income tax money (COIT) that is to be used for park improvements or development of new parks. That fund currently has about $5.2 million dollars, of which about $4.5 million has already been allocated for various uses by the parks department. But of that $4.5 million allocation, $2.5 million are planned to go into rainy day funds according to Klitzing.

Brainard acknowledged that he believes it would be possible for the deciding entities to use those COIT reserves toward the purchase of the golf course.

“That’s a large chunk of change,” Engledow said, noting that it would difficult for the parks department to find the money otherwise unless Clay Township were willing to float a bond on its behalf.

“If it weren’t for Home Place, we could just transfer it to the parks department,” Brainard said.

That’s because the city provides about 98 percent of the parks department’s funding, but it would end up subsidizing Home Place’s portion of the contribution.

Home Place, an approximately 1-square mile area, is the only portion of Clay Township that hasn’t been annexed by Carmel.

And then there is the issue of the pool that is attached to the Brookshire clubhouse but separately owned by the nonprofit Brookshire Swim Club. Current and former Brookshire neighbors including Leo Dierckman, a member of Carmel’s Board of Zoning Appeals, run the club.

According to Klitzing, the parks department already conducted a feasibility study on purchasing the pool and the parks board rejected the idea.

Brainard said he would likely encourage the city council to approve a purchase of the pool to facilitate any Brookshire deal. Any deal he said would improve the course’s marketing capabilities and provide more staff to respond to course cleanup events.

“The public isn’t going to see any difference except more efficient operation after a storm, Brainard said.

And the city envisions Higgins and the rest of the Brookshire staff remaining in their current jobs, but under the management of the parks department.

So if the city were able to arrange a payday similar to the 2006 purchase price, how would the windfall be used?

Brainard said it should go into the general fund.

But the council might have other ideas. If a sale were approved, City Councilor Luci Snyder said she would like to see any purchase price used to pay down the original debt from the course’s 2006 purchase that has since been consolidated into other city bonds.

And despite all the deal’s complexities, perhaps the 47 percent of survey respondents were right not to care about Brookshire’s ownership.

“It will remain a Carmel asset regardless of who owns it,” Engledow said.

That’s because after 2006, the city rezoned all its golf courses as parks to eliminate the threat of redevelopment, Brainard said. The only exception was Mohawk Hills Golf Course, which still is planned to be redeveloped as part of the Grammercy project.

And in the end, when the complexities of any potential deal are forgotten, how much is a public golf like Brookshire worth to the residents of Carmel?

Brainard said, “I think it’s important to have a low-cost course for retired people.”