You are at:Home»Current in Zionsville»I’m just paying forward with pumpkins 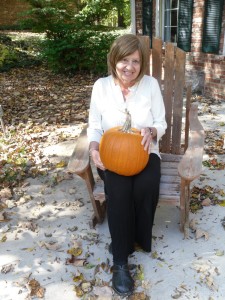 Miriam Nidiffer with a pumpkin that grew from a “Thank You” pumpkin seed. (Submitted photo)

What’s not to like about pumpkins? They’re round and orange and happy-looking. Even before we’ve carved smiles or painted silly grins, already they look happy. Heck, they look happy just growing in the field together – like a bunch of bright orange balls waiting for some kids to come and play.

As many of you may know, I spent much of 2012 in chemo. Friends and family were unbelievably generous with time, love, cards and food. I grew tired of writing thank-you notes and decided to give out some thank-you pumpkins. Funny how “ye olde elementary education training” kicked in. I got almost giddy buying markers and sparkles. Then I was off to the pumpkin sellers. After three stops and some first-rate price haggling, I bought 32 pumpkins.

When decorated, none wore a smiley face; but each boasted a big “THANK YOU” from my magic marker. (They don’t call it magic for nothing.) A fancy bow around the stem with a glittered leaf tucked in, and voila! Something between a fourth grade girl scout project and Martha Stewart.

As with Christmas cookies and babies, the hard part was delivery. I hit pay dirt with my exercise class – eight people in one spot. Most, however, I took from one door to another, greeted with puzzlement.

“Oh, okay, thanks for the thank-you.”

And so it went. I don’t know what happened to 29 of the pumpkins, but I know about three.

Tania Roudebush, owner of Black Dog Books on Main Street, used hers as the centerpiece for her Thanksgiving dinner.

Zionsville homemaker and Roger’s mom, Ruth Burrus, made a pumpkin pie for herself and her husband Otis.

Finally, Zionsville poet Miriam Nidiffer had a real surprise. After tossing the pumpkin out, guess what happened? Pumpkins grew. Round, orange, happy pumpkins.