You are at:Home»Current in Carmel»Looking ahead to 2014: Carmel superintendent sees year ahead as time to plan for future 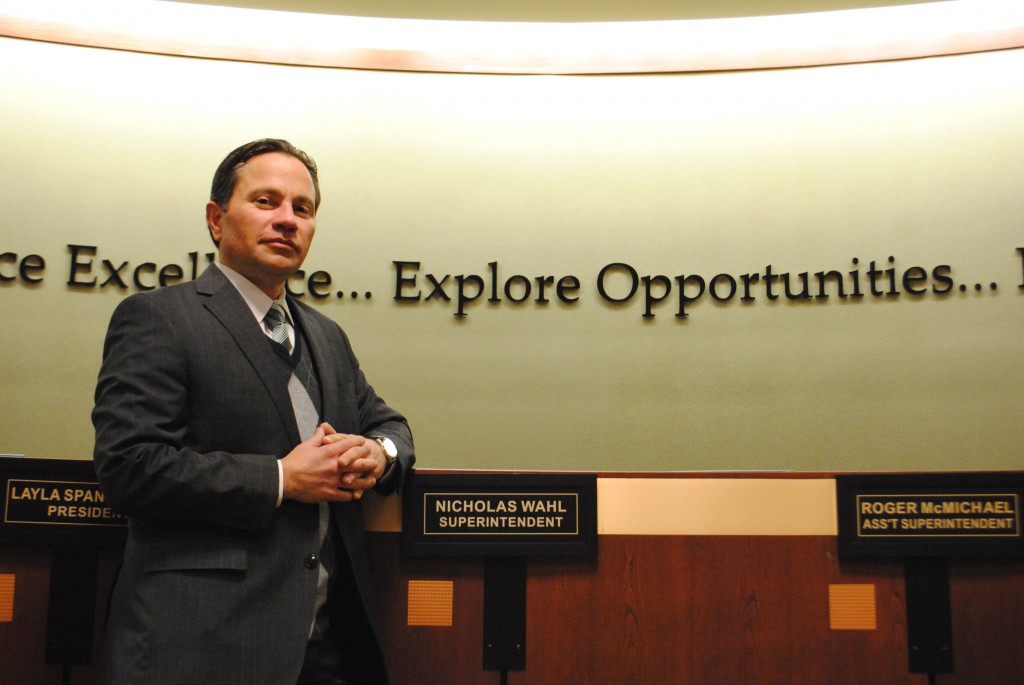 With all the proposed housing developments coming to the city, do you have any indication how that would affect student enrollment?

We’re updating our demographics study. And we’ll look at the demographics study and then look at building capacities. That’s an action this year in our goals under facilities so that we can make sure the capacity of our buildings meets the shift in demographics. And early reviews are that there’s going to continue to be slight growth. I’ve also talked to mayor Brainard, you know, just comparing notes on what both our demographers are saying. Once the city of Carmel and Carmel Clay schools get our information, we’re going to sit down and share it. We’re smarter together. We’re both open to that discussion.

With regard to the facilities study, is there any possibility that could result in any redistricting?

I think that’s impossible. This year is definitely a year for data analysis and gathering. We’re not looking a redistricting for next year.

I know a lot school districts that are facing similar growth pressures have kind of sought maybe some relief in blended learning (mixing in-person classes with online-only classes) as a way to kind of relieve some stress on crowded classrooms. Have you tried applying that in Carmel?

We have not gone into the online class piece to substitute for high school courses or anything like that. We’ve not done that.

And there’s no plan to?

Not to substitute for what we currently do. There is a chance to enhance – to expand opportunities. But that’s been around since before my time with the Indiana Online Academy. It’s something to keep an eye on, but that’s not been something we’ve done in response to capacity issues.

I know you’ve spent a lot of time creating a list of goals. I was just curious if you could elaborate any more on the practical implementation of those goals?

The beauty of the model is, by design, it’s student-centered. That anything we’re doing, or considering doing feeds off, “Is this good for the kids in the classroom.” It’s more complex than that, but by design it’s meant to be very transparent. If it’s facilities, if it’s finance, if it’s our faculty and staff and communication of what we’re doing – all those things feed around what’s really important for our kids. And the governing principals that surround the model, talk about best practices and research-based practices, and aligning with standards – Common Core standards and state standards. So that there are governing practices and principles that will filter any of this stuff – these initiatives, goals, actions – that may or may not get into the classroom. So practically speaking then we have developed actions underneath each goal area that make it practical to implement. But by design those actions are designed to be ever encompassing as well because we’re going to continue to explore opportunities to integrate technology into the daily instruction. And that’s an engagement of administrators and teachers in the process. And that has begun – we have the bring-your-own-device initiative that’s going on, each student and teacher have their own Google doc account to take advantage of that technology, the student and teacher management systems are utilizing that technology as it looks at student assessment, looking for trends. We’ve implemented an administrative practice on best practices for the use of social media (Carmel students are allowed to access Facebook and Twitter during school) as a means of communication – which is an important tool because our families are utilizing that on a daily basis to be informed. So we have a best practice on that now as it relates to getting information to our families.

If you were just a student walking through the halls, what are the big changes you would see with the implementation of the goals?

I wouldn’t say you’re going to see it. My hope is that people start to feel it before they see it. What I mean by that is, a sense of collaboration and common interest in problem-solving. It’s about giving all stakeholders a voice and an awareness of what the student-centered and goal-setting model are all about. (I’ve worked hard in past month explainingg the goals so that ) There’s a sense of common interest and common energy to create a synergy in what we’re trying to do. So if you’re a student, I don’t know that you’re going to see anything, but my hope is there’s a feeling and they start to feel that there’s this sense of common interest and common purpose.

So the new goals model is about shifting priorities to focus on finding common interests to solve problems?

Well, and to capitalize on the fact that Carmel Clay schools have an intuitive strong sense of community already. So again, I’m not trying to reinvent any wheels here, but capitalize on that already common community interest and engage meaningfully in that process. And then we do have things that we are doing. We are updating our communication plan. We are successfully implementing Common Core, and that piece permeates literacy adoption, math adoption. Those standards are reflected in the practical adoption of out texts. So it’s one thing to talk about implementation of Common Core – but how do you do that? Well it is a filter with which we look at the committee structure and then the literacy adoption and math adoption and that was already a part of the fabric here before I came.

So would you say that Common Core standards have already been fairly well implemented here in the district?

I would say yes. And again that started before my time. You know the state gave the directive that they’re adopting Common Core standards – and I know it’s on a pause right now. The latest I heard is that it’s on pause.

Are there any other legislature actions that could affect the district in the upcoming session? Or any actions that you’re monitoring?

Not that I’m aware of because it’s not a big session coming up. I’m learning this two-year cycle that Indiana has now, and I guess this is a light cycle, so to speak. So I haven’t heard a lot of big movement – it looks like it’s going to be a very low-profile session. By the same token I met with our representatives, just to get to know them, and secondly to represent the interests of the schools as it relates to anything that does come out of the statehouse that may put additional burden on us – i.e. unfunded mandates – that may or may not come out in the future. All I ask is that we have a voice at the table to represent how that could impact Carmel Clay schools. And I’m fully aware that funds run through the statehouse, and it’s important for everyone to know that we’re very interested in where that’s disbursed and how that’s disbursed.

Is there any technology that you foresee coming in the next year that would radically impact classrooms or help learning?

Well I think that bring-your-own-device is a healthy practice as it’s becoming common place here where we’ve recognized that students have smart phones. Working with them on the proper use of these smart phones can be a tremendous advantage, instructionally and for the student, because we all know that’s a part of our world. We’re monitoring the textbook companies. As they start to have more interactive e-textbooks – and they’re not there yet – we want to keep an eye on that because when that day comes that will definitely change the way the common thought of having a backpack full of books happens. But the textbook companies are not quite there for a pre-K through 12 environment. They’re actually pretty much there at the higher-ed level. My read on it is (that university sales are a more lucrative market), so why would they change so dramatically. But there’s movement to an e-textbook world and we’re keeping an eye on it. That could be a little bit of a game-changer.

Would that affect school district costs or would e-textbooks be a cost to the parent?

It depends on what the textbook companies (as the gatekeepers of online knowledge) decide to charge. You know, to be determined. I think that may be where they’re trying to figure out what they’re going to do. It’s something we should monitor, and we are.

Can you cite an example of a situation where technology is helping in the classroom?

Here’s what I’m observing. This whole concept of people interacting online through Google docs is becoming a healthy medium it’s actually getting some traction with our parents making it far easier to access … the reporting and forms that they have to do. But on the same level I think it’s an exciting opportunity for there to be innovative ideas shared. This whole idea of model college and career readiness skills and the social and emotional learning skills line up very well in that employers are looking for our students to be able to collaborate to be interactive to be organized, to have all the executive functioning skills, have the ability to persevere, have grit – all these things – and as we look at technology fostering that collaboration, that’s pretty exciting because that’s what’s expected in the workplace. It fosters more collaboration and it also fosters an ability of our whole professional learning community – from teacher to student to parent – to be very efficient and very transparent with their communication. And as you and I know, people are busy. And anything we can do to economize and improve communication we should be all about. I see that also with us and our ability to communicate student assessment information. I’m looking forward to getting everyone at the table so that we have an opportunity to look at students being actively involved and knowing how they’re doing growing both their well-being and their academics. So the student-growth model is going to be something I’d keep an eye on. We’re going to explore that this year. How are they growing academically and emotionally? And then utilize technology so that parents can log in to a parent-portal and securely access how their child is doing. We do that now with grades, but I see that being a much more robust access where they’re looking at grades and growth over time.

Is this something that parents have asked for?

No one has asked me for it. I’m just suggesting that as we look at the student growth model that’s something I envision. I’m going to champion that. The groups I’ve spoken to, it has been welcomed with open arms. It’s going to take time to get to that part, but you’ve got to have that progressive vision in mind to get there. We want students to own their work. I think transparency and access is important. But I think even more importantly, is we want to have the student own their standardized tests and understand if they take the ACT – OK, that’s meaningful for college entrance and all that – but this is your test, you took it. What does this tell you? And start to have that part of our culture here.