You are at:Home»Current in Carmel»Opinion: Pete Seeger Was A True American Hero 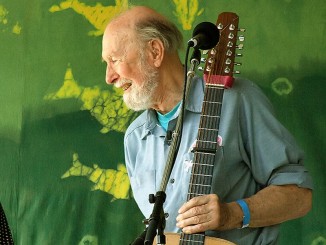 I lost a personal hero last week.  Folk-singer/activist Pete Seeger died at age 94 following a brief illness.  For my money, Seeger defined what it meant to be an American.

Pete Seeger was born into a musical family, and was an aficionado of the twelve-string banjo.  He and his folk-music group, the Weavers, scored the biggest hit of 1950 with “Goodnight Irene.”  Seeger went on to write many popular songs, including Jimmie Rodgers’ “Kisses Sweeter Than Wine,” “If I Had A Hammer,” popularized by Peter Paul & Mary and by Trini Lopez, and (perhaps most notably) the Byrds’ “Turn Turn Turn,” a musical setting for the popular third chapter of Ecclesiastes.  Many folk music standards are Pete Seeger songs, such as “Where Have All The Flowers Gone?” and “Big Rock Candy Mountain.”  During the Civil Rights Movement, he was one of the musicians who popularized “We Shall Overcome.”

As a young man coming of age during the Great Depression, Seeger joined the Communist Party, because (as I heard him explain) the Communist Party offered a sense of hope for working men and women – which included Seeger.  During the 1940’s, Seeger became disillusioned with Stalin’s Soviet version of Communism, causing him to drift away from the Communist Party.  Nonetheless, Seeger was blackballed by the McCarthy Commission during the Communist Witch Hunt of the 1950’s.  During his 1955 testimony before the House Unamerican Activities Committee, Seeger refused to implicate himself or name other members of the Communist Party, declaring, “I am not going to answer any questions as to my association, my philosophical or religious beliefs, or my political beliefs, or how I voted in any election, or any of these private affairs.  I think these are very improper questions for any American to be asked, especially under such compulsion as this.”

Fortunately, Seeger’s legacy was preserved during the 1960’s, as he became a vocal advocate for the withdrawal of US troops from Viet Nam, an advocate for Civil Rights, an advocate for nuclear disarmament, and an advocate for the preservation of our environment.  But Pete Seeger was not some wild hippy yelling in the streets while burning an American flag.  No, Seeger actually lived the life of peace he advocated for his country.  Seeger and his wife built their own log cabin in the Hudson Valley Region of upstate New York.  There, they lived off the land, and raised their family, bypassing modern conveniences for the simple life of which Seeger often wrote.  Seeger said, “I feel most spiritual when I’m out in the woods. I feel part of nature.  Or looking up at the stars.”

Although he was a Unitarian Universalist and I am a United Methodist, I always felt a religious kinship with Pete Seeger.  I believed we worshiped the same God.  A God who loves all people, regardless of race, skin color, creed, or sexual orientation.  A God who is appalled that anyone would desire to write discrimination into any Constitution.  A God who knows that all people deserve a fighting chance in this world.  A God who is responsible for our universe.  Seeger said, “Whenever I open my eyes I’m looking at God. Whenever I’m listening to something I’m listening to God.”

Pete Seeger was the best of us.  He personified everything that was right in the world.  I don’t expect to come across another like him during my lifetime.