You are at:Home»Current in Fishers»Brown announces run for City Council 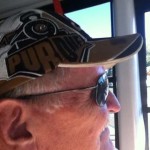 Brown, a resident of Fishers for 35 years, is currently employed with HSE Schools. He worked with the Indiana Transportation Department for 12 years.

Brown retired from Purdue University as an Energy and Environmental Engineering Manager. Previously, he had been a CEO and COO of two high technology companies. He started his career with Bio-Dynamics, Inc. and worked at Boehringer-Mannheim and Roche Diagnostics.

“My experience in high technology, engineering management and finance will be instrumental in the Fishers Council,” Brown said.

Brown has served as a charter member of the Fishers Station Kiwanis Club and was president of the Sunblest County View for eight years. He has also worked to receive neighborhood matching grants with the Town of Fishers.

“It is exciting times for Fishers as it becomes a second class city in 2015, and with six district councilors representing their respective neighborhoods plus three at-large councilors, Fishers residents will be served even better than in the past,” Brown said.

“I have witnessed the tremendous growth of Fishers and its infrastructure. Continued growth and expansion of our schools will be important over the next several years and I intend to listen and respond on all issues during my term in office and available anytime,” he said.