You are at:Home»Current in Zionsville»Opinion: Terrorists and drunks: Not what I thought 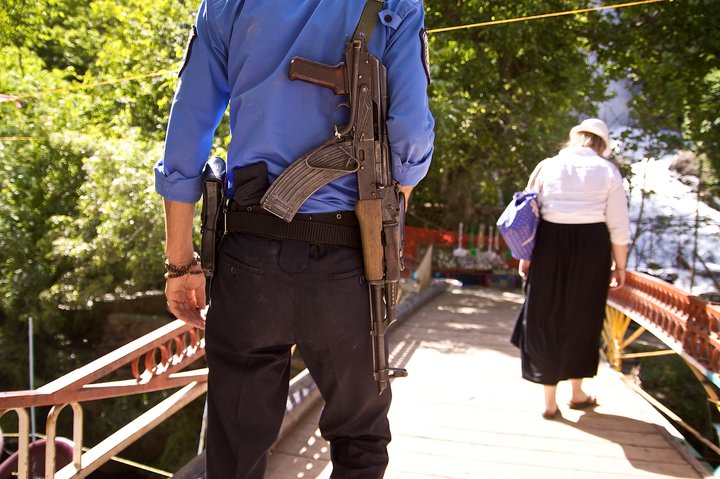 Sophie Pappas walks ahead of a Kurdish guard on the border of Iraq and Iran. Though stern-faced this guard became a great protector and friend to Pappas as she interviewed Kurds in Northern Iraq. Photo by Joshua Gigliotti.

When I received an email about doing a story on the American Legion in Zionsville, I wasn’t exactly sure what to expect. Old vets, beer drinkers, what kind of people would I meet there?

I should have known better. From my experience, people are never what you expect them to be. Before an interview, it’s natural for a journalist to have some sort of preconceived notion; maybe this is from a quick Google search or maybe it’s from word of mouth. But it’s never right.

I learned this during my time interviewing resistance fighters in Northern Iraq. A quick glance around the Internet would tell you that these people are considered terrorists by the U.S. government, even though that couldn’t be farther from the truth, as they pose absolutely no threat to the U.S.A. whatsoever.

Barbara Walters always says that you can never know too much about someone you are about to interview. I disagree. I think you can know too much, and thus sometimes journalists don’t ever allow their subject to really tell their story. What happens is that an insincere article is published, based on what the writer learned on Google.

In short, the folks at the American Legion were nothing but hospitable, well spoken and kind. No drunks, no thieves, and the food they were cooking actually looked amazing. Their membership chair even invited me to be an honorary member of the Legion, since my grandfather had served in the Navy. And I can’t say I didn’t consider it for a minute! (Discounted drinks and pizza parties … yes, please!)

You just never can tell what a story about a leaky roof will lead to. But I resolve to never make assumptions before going to an interview again. Because you never really know who somebody is until you meet them for yourself.