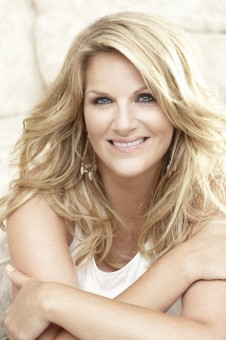 Country music star Trisha Yearwood will play at the Palladium April 3 with Karyn Rochelle as the opening act. (Submitted photo)

It’s been five years since Trisha Yearwood has toured, but fans often ask when she’ll be back on center stage. Now, they’ll have a chance to see the three-time Grammy winner on April 3 at the Palladium. Yearwood is currently a little more than half-way through a 23-show tour – all in smaller, more intimate venues.

“I miss performing in that setting,” she said in an exclusive interview with Current. “There is no album out, nothing that I am out there promoting, I just want to do it which is why I am calling it the Just Because Tour. I am having so much fun – it’s just been a blast.”

It’s also something she’d put on the back burner while she concentrated on her Food Network show, Trisha’s Southern Kitchen,

“The TV show has been wonderful and a really nice surprise and is really all consuming – in fact, I should be filming right now – but I said ‘I have to go play some music,’” Yearwood said from her home in Oklahoma. “I think people get the misconception this is what I’m doing now because I am not doing the other (music) but I want to do it all. It’s important that folks know I am not choosing one over the other but, if I did, I would always choose music – it feeds my soul and is what I do.”

It was in 1991, at the age of 27, that Yearwood hit the big time with her debut single “She’s in Love with the Boy,” which became her first No. 1 hit and was featured on her self-titled debut album. Her last album – her 12th – was released in 2007. She recorded some new music but put it aside when her mother became ill and passed away in 2011.

“My goal is to finish that before the end of this year just to get that done and decide where it will go and how it will be,” Yearwood said. “Once I am on the road with Garth it will be harder to finish.”

That’s right, Yearwood and her husband of almost nine years, Garth Brooks, plan to tour together this fall.

“Garth and I have been talking for years about when the youngest graduates high school just firing up and going out on the road and doing a big show,” she said. “I’m excited about that – I get to play with the love of my life, and that will be awesome.”

She’s also excited about living in Nashville on a more full-time basis. Currently she and Brooks split their time between Oklahoma and the Music City.

“When the youngest is out of high school and we are on the road we will still live in both but will be in Nashville more – it will be more of a base,” she said. “In Nashville if someone wants you to come sing on a project or sing harmony you can say ‘Yeah, I’m 20 minutes away,’ and run right down there. But here, we have to plan more. Like tonight – she has a soccer game and when you have a child in school you plan your lives around things like that.”

In the meantime, she’s hard at work on her third cookbook – her first two made it on to the New York Times Bestsellers list – and gearing up for her cooking show’s fourth season.

Although she’s the first to admit there are a few things she’s tried her hand at on the cooking show that haven’t always gone as planned.

“There was one thing we made – I told the producer and directors I wasn’t sure how it would turn out – it’s a chocolate cake with caramel icing that I have it every year on my birthday – my mom would make it for me,” Yearwood said. “Most of the recipes in the book are really easy but this icing is dependent on the weather. There is a window when you are beating it when it’s perfect and, then, everything is bad. At first it looked perfect but when we came back to serve it on the show some of the icing had pooled on to the bottom of the cake pan but it was still really good.”

Just like the career she said she’s been blessed to have.

“So many things that have happened in life and career that I would not have expected. I never dreamed I would be talking about a TV show that is number one on the Food Network and cookbooks on the best seller list and how much fun all that is,” Yearwood said. “It came out of the same thing music did – out of something I love to do – it’s really wonderful. I‘ve not done anything in my career that hasn’t come of out something I love to do. If you choose to do things you enjoy and find way to turn those things into job then it’s not really a job.”

Trisha Yearwood ● 7:30 p.m. April 3 ● At the Palladium in Carmel ● Tickets start at $58 ● For more information call 843-3800 or visit www.thecenterfortheperformingarts.org