You are at:Home»Current in Carmel»Carmel Cover Stories»Lender throws wrench into Village of West Clay building plans 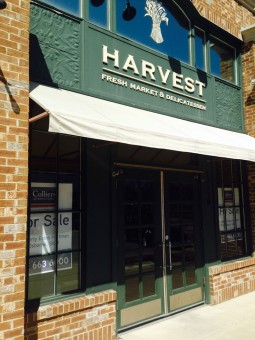 Landlords are still looking for commercial tenants to fill space like this one left when Harvest deli and market closed. (Staff photo)

For the longest time, the story of development in the Village of West Clay was a booming residential sector paired with struggling commercial development.

And while things aren’t completely reversed, today’s update is looking better for new businesses joining this part of Carmel while home development has encountered some abrupt speed bumps.

Last Month, Brenwick Development Company sent out a release announcing that the company would be suspending its operations because its lender won’t release the deeds on undeveloped land. This has put a stop to about $7 million in home development for about 50 lots. Refunds have been offered to would-be buyers who were already presold on homes.

“Everything is frozen at this point, and we are trying to get it resolved,” George Sweet, president and CEO of Brenick said. “We were just blind-sided, and so now we’re taking the right steps to fix this.”

The deeds were originally held by BMO Harris Bank, but the new lien holder won’t allow development of the land. This has prompted litigation from Brenwick against the bank. Sweet said he received no advance warning from the bank and that Brenwick was not in default under the terms of the loan agreement.

“We expected BMO Harris to continue to work with us in view of the rebound in the economy and the sales we had pending,” he said.

Sweet said he wants to reassure people about the future of the Village of West Clay because the 680-acre development is 90 percent finished and he believes these homes will be sold easily once the problem is resolved, since he said the demand is present. The lots that would have been developed are spread out between four or five different neighborhoods.

Walking through the business square of the Village of West Clay, people will find plenty of vacant storefronts.

Ever since Harvest deli and market and Pamfilio’s Italian Restaurant both closed, residents have felt the void.

“We are without a place to get a cup of coffee or have an extra glass of wine and walk home,” said resident Doug Lippert. “And I’ve heard many people say they’d be willing to pay extra money in fees to help make something happen.”

Alex Cain has lived in the Village for 11 years and sells real estate for West Clay Realty. She said it’s the perfect spot for a new restaurant.

“A new business will have a very captive audience,” she said. “The residences here are chomping at the bit. It’s all everyone talks about. We are at the point where we’re like, ‘Please, someone come it.’ Because we miss it. And now we’re not going to take it for granted.”

The good news is that some new development is finally happening.

Lainie and Kevin Paul, owners of Brockway Public House in Carmel, are opening a new Irish pub called Danny Boy Beer Exchange. The Pauls, who live in the Village of West Clay, are constructing a new building to accommodate the beer brewing equipment.

Still slow in some ways

Residents are excited about the new establishment, but they’d like to see more, they say. Unfortunately, additional development might be a ways off.

The Harvest building remains vacant partly because of the process following legal troubles for its former owners. In 2013, Charles Blackwelder, his son Chad Blackwelder and his daughter Cara Grumme were accused of committing securities fraud. It is alleged that their company, CFS inc., bilked nearly $10 million out of its mostly elderly clientele.

Their buildings were to be sold in a sheriff’s sale to resolve debts. One of the buildings, referred to as the Brenwick Building, was purchased but the others are still in receivership.

When you talk to Village of West Clay residents, many get defensive about a perceived image that businesses can’t survive in their area. They often bring up the Blackwelders’ legal troubles to show that they believe the vacancies have nothing to do with neighbors not supporting the businesses.

David Klain has lived in the neighborhood for five years and his wife Sherrie owns a business in the square called Basket Pizzazz. He said business is doing great and “the demographics are terrific” so it annoys him when people think that there’s something wrong with the area commercially.

Still, there are some challenges to starting a new business in the area.

“Some developers think that other businesses didn’t work out here that they won’t, so they’re a little scared of that,” Cain said. “And some of the commercial land and the architectural restrictions make it not cheap to come out here. It can be cost prohibitive and that doesn’t help.”

Potential new additions haven’t questioned that Village residents would support their restaurant, but whether the location would work for drawing customers from outside the immediate area. Cain believes surrounding subdivisions still see the commercial square in their sphere of influence.

James Winner, who has lived in the Village for seven years, said he believes there is “pent up enthusiasm” for a new restaurant which makes the market ideal.

“I can tell you the Village residents are disappointed because we all wanted the walkable lifestyle,” he said. “I think the next business that opens here will get even more support because we know what we’ve been missing. The residents here deserve a successful business. Those were extenuating circumstances with those other places.”