You are at:Home»Current in Carmel»Carmel still hasn’t issued detailed list of 2014 road projects 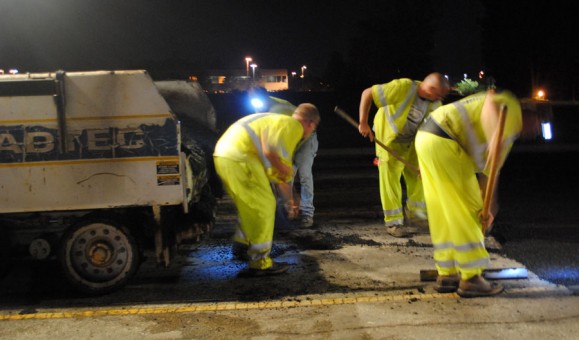 The Carmel City Council decided at its May 15 finance committee meeting to recommend restoring the city’s budget to help repave roads, but at an amount lower than the mayor had hoped for.

The council wanted to move $700,000 from its rainy day fund to help the city keep up with road repairs, especially after a rough winter that contributed to an increase in the number of potholes.

Mayor Jim Brainard agreed and suggested an additional $800,000 on top of that to really keep the roads in shape. Some councilors decided that would be too much to take out of reserves and that by using up its available cash in savings, the city’s future bond ratings could take a hit.

Mayor Jim Brainard said he was disappointed with the smaller amount of money dedicated to roads, saying that it’s a better idea to fix roads now instead of letting them become more expensive problems.

“That’s not a good financial decision to let the money sit in the back and let the roads deteriorate,” he said.

Some councilors questioned why $1.5 million in additional funding was needed, especially considering that no list of detailed road repairs was released describing which streets would be worked on. This confounded many council members, even those who often disagree on budgetary issues.

“It’s mid-May, where’s the list?” Councilor Luci Snyder said. “We should know how the money is going to be spent.”

Councilor Rick Sharp said he was surprised to hear that.

“We still don’t know which streets we’re going to do? That just seems crazy,” he said.

Brainard said he expects Dave Huffman, director of the street department, to have a list ready in the next couple weeks because he does every year based on how much money he knows he has.

“I rarely get involved with that,” Brainard said.

Huffman previously told the council that about $4 million is needed to keep up to date on the roads and there’s already about $2.6 million that they have to work with.

Unfortunately, due to a family emergency, Huffman was not on hand to answer the council’s questions, but he previously said that his team is working hard to compile a list.

“We are paving Pennsylvania now and I know part of 111th is going to be done as well as part of Cherry Tree,” he said. “As far as subdivision streets, I’m not ready to give even a partial list at this time.”

Huffman told the council that any improvements to Keystone Avenue will probably have to wait until another year.

In Indianapolis, a complete list of streets was released before its city council approved $8 million in funding on May 12. Of course, Democrat and Republican councilors disagreed about the list because some felt their districts were underrepresented.

Brainard pointed to the disputes over roads in Indianapolis as to why they don’t release a list ahead of time.

“That’s why we don’t do the list until after the money comes in,” he said. “We leave it to the street department to go out and pick the streets that need it the most and I’ll back you on it. If someone calls and complains, get their name and we’ll go look at it. But we’re not going to go and make political decisions. We are going to make infrastructure decisions.”