You are at:Home»Current in Carmel»Carmel Community»Carmel’s Monon Trail repaving plan likely delayed until 2015 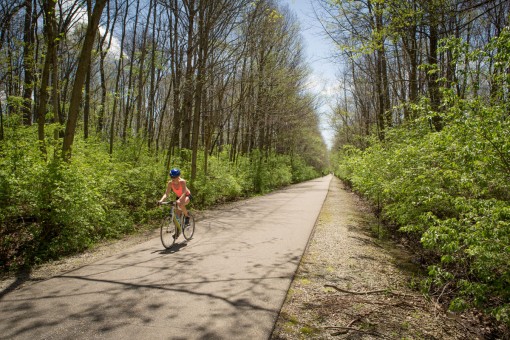 The section of the Monon Trail trail between 96th Street and Carmel Drive will likely be repaved in 2015. (Staff photo by Sara Crawford)

It appears the plan to repave the southern portion of the Monon Trail that had been scheduled for this year won’t begin until 2015.

Carmel Clay Parks and Recreation Director Mark Westermeier has said the trail needs to be resurfaced with new asphalt between Carmel Drive and 96th Street due to normal wear and tear over the past 15 years.

But the project would involve raising some manhole covers and the parks department would like MCI to pay for it because the company has buried cables beneath the trail.

It will also give the city and parks department time to plan detour routes.

More features could also be implemented on the southern portion of the Monon Trail, as Westermeier said that the parks department is considering adding adjacent park land.