You are at:Home»Current in Carmel»Carmel school board changes gun policy to comply with state law 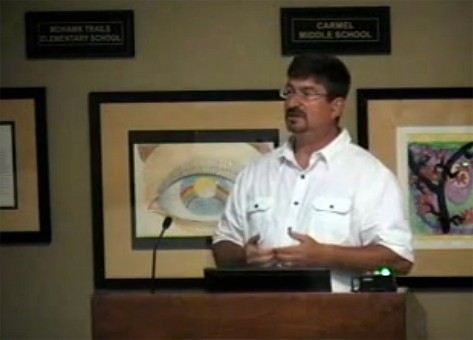 Democratic State Representative candidate David Russ, who will challenge Republican Jerry Torr for his seat in the November general election, spoke out against the proposed gun policy change passed by the school board. (Submitted photo)

The Carmel Clay School Board updated many of its policies at its June 23 meeting – the most controversial of which was the change made to its weapons policy.

The new policy allows for guns to be on school property if they are locked in the trunk or glovebox of a car and out of sight.

The change was made because the state passed a new law which will go into effect July 1, and it prohibits any school board from maintaining a policy that contradicts the new law.

During the past few weeks, many members of the community had expressed concerns and objections in various ways toward the required changes, and two attended the school board meeting.

Democratic State Representative candidate David Russ asked, “What else will be done to keep our kids safe?”

“To me it’s very shameful that these rules were put in place. And I don’t understand the value of it,” he said.

He was concerned students will target vehicles storing the guns or use them to be heroes during dangerous situations.

He agreed with Russ in that he fears amateurs will attempt to deal with situations that should be left to the professionals.

Although School Board member Greg Phillips expressed his distaste toward the policy change in the previous meeting, he said, “Local policy cannot trump state law.”

Phillips did, however, encourage people with concerns to address the members of the legislature who voted for the law. He said he believes Carmel has a considerable influence and can use this influence to persuade legislators not to usurp local control of local education policy.

Phillips did oppose the policy change in the final 4-1 vote.

He said, “We are changing our policy only to bring it in compliance with the new state law. Otherwise, we would have maintained our policy that generally prohibits any possession of guns on school property.”

He encouraged anyone who was aware of a gun on school property to continue to alert school officials or law enforcement officers.

All school board members agreed they were not in favor with this new law and would continue to provide the best possible safety and security for staff, students, and the community.