You are at:Home»Current in Carmel»CarmelFest: The festival has come a long way since the days of the stilt walker 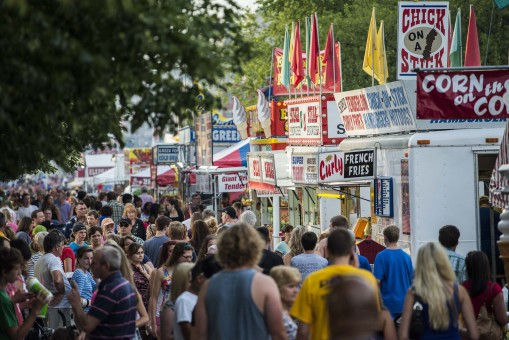 What once was a small gathering has grown into a major regional attraction. (File photo)

All great things take time, and CarmelFest is no exception, according to festival committee members past and present.

The origin of the event dates to before 1900, as the formerly small town of Bethlehem celebrated with cake walks, horse shows and its own parades. Though larger parades and the addition of street fairs eventually were implemented, it wasn’t until the late 1980s that the festival was renamed CarmelFest.

The first official CarmelFest was orchestrated by then Mayor Dottie Hancock and then Carmel Chamber of Commerce Director Nancy Blondin. It was conducted in a vacant parking lot that eventually would become City Hall.

Only 150 people attended that year.

Despite the lackluster turnout, the festival continued to grow each year. Moving from the vacant lot to the high school, then to Civic Square for four years under the direction of Mayor Ted Johnson, the festival, known as “CarmelFest at the Fountain” largely was managed by citizens of Carmel.

It wasn’t until the Rotary Club of Carmel took over that the festival began to really take off.

“It’s one of, if not the largest community events in Hamilton County,” said Gary Frey, former chairman for the festival from 2008 to 2011. “Every Rotary Club in the county has heard of CarmelFest.”

CarmelFest remained a relatively sparse affair until recent years, with only one stage for entertainment and a handful of entertainers for younger attendees.

There’d be a stilt walker or a magician, and that’s about it,” said Jeff Worrell, current chairman of the festival, who will relinquish the role to Gary Sexton at the conclusion of this year’s festival. Worrell said he would remain connected to the event in a lesser role, though.

Worrell began his involvement with the festival in 1994, and he also has managed the fireworks celebration for 20 years.

“Back in our early days we might have had a dump truck, a cement truck, things that weren’t all that entertaining. Over the years, we’ve tried to make the parade have an entertainment component rather than just ‘things.’”

One of the benefits

Increased diversity in Carmel also has impacted the growth of the festival.

“That’s probably one of the benefits of living in Carmel … the diversity we do have, which many people probably don’t understand,” Worrell said. “The groups that come out and participate in the festival, it’s wide-ranging. We’re lucky to have some cultural groups that want to showcase their history and their culture to the parade guests, and they do that very well.”

One of CarmelFest’s major attractions always has been the parade marshals, according to Worrell.

Richard Jewell, the man falsely accused of orchestrating the 1996 Atlanta Olympics bombing, was honored as the Grand Marshal in 2001 in accordance with that year’s theme of “Unsung Heroes.”

Jewell was responsible for discovering the bag containing the bomb and alerting Georgia Bureau of Investigations authorities, resulting in the evacuation of numerous potential victims.

Now festival committee members are looking toward the future of the festival with an eye on the inevitable expansion that will be necessary to accommodate the demand of 30,000 visitors a day.
“I’m worried I’ll have to shoot the fireworks from somewhere like Kokomo,” Worrell said. “We’re just running out of land big enough.”

Festival coordinators also plan to poll attendees, asking them from where they hail and their specific reasons for visiting Carmel.

Worrell said he has found that a wider array of entertainment is what draws people in. People who follow bands throughout the state tend to show up at the festival.
“If you grow, it takes tremendous amounts of money,” Frey said. “We don’t want big for big’s sake.”

The festival’s continued growth remains an opportunity for community leaders to expand their own skillsets, too.

“It’s an opportunity for leadership,” Frey said. “There’s no prima donnas. There’s a sense of service with people willing to lead by example. It’s fascinating and rewarding.”