You are at:Home»Current in Carmel»CarmelFest: ‘Guitarmelfest brings us together to just play what we want’ 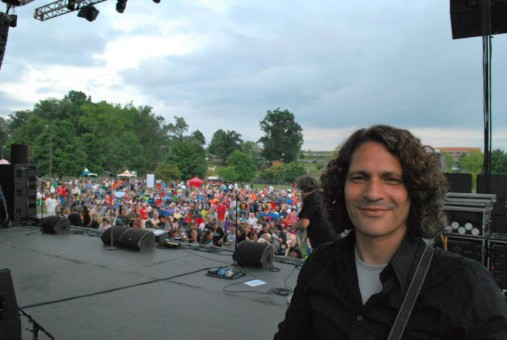 CarmelFest will play host to a wide variety of bands this year, including artists that put their own spin on famous songs, while also performing original material.

Benito DiBartoli describes his emergence as a musician as “a little bit late,” starting at the age of 17. And it wasn’t until he was 23 years old that Bartoli considered himself a professional.

DiBartoli, who’s played for top 40 blues and rock bands, moved to Indianapolis in 1997 from Pasadena, Calif., to pursue a relationship. After five children and the relationship’s failure, Bartoli continued on as a musician, playing in country, blues, wedding and R&B bands and acoustic solo efforts.

“Those gigs kept me afloat for 10 years,” DiBartoli said. “I enjoy having the variety.”

“I feel like Tommy’s really been grooming me for this,” DiBartoli said. “I attribute everything I am to this guy.”

According to DiBartoli, part of GuitarmelFest’s appeal lies in its freedom for the performers.

“Guitarmelfest brings us together to just play what we want, and really showcase what we’ve learned over the years,” DiBartoli said.

My Yellow Rickshaw frontman Nathan Klatt said he appreciates the festival’s ability to bring people out.

“Because CarmelFest has a good reputation, it brings a lot of people who will hear about us, and continue to build our product,” said Klatt. “Word of mouth is still king. CarmelFest certainly provides that.”

My Yellow Rickshaw, self-described as a band about joy and celebration, formed officially in 2009 after three friends were reunited in the Indianapolis area. The trio had spent their youth jamming in neighborhood garages and fraternity rooms until jobs and other responsibilities initially drew them apart.

Despite humble beginnings, the act of performing and creating music has become incredibly important to both Klatt and DiBartoli.

“It’s very easy to have this cavalier attitude about musicians,” Klatt said. “When you’re playing a lot, it’s a very professional business operation, and I love it. It takes a lot of work by everybody to keep it going.”

“Every job I ever had, I’ve been fired from,” DiBartoli said. “Guitar gigs, though, I’m always on time and prepared.”

DiBartoli also will be sporting rare gear during his GuitarmelFest performance, including a 1962 Fender Stratocaster and a Fender Vibratone amp, the same model used by Stevie Ray Vaughn on his hit “Cold Shot.”