You are at:Home»Current in Carmel»CarmelFest: Parade floats will feature something for everyone

Get ready for one incredibly varied Fourth of July parade at this year’s CarmelFest, featuring displays from all kinds of communities, organizations and individuals.

One such individual, rather than construct a float, will be bringing his own vehicle. 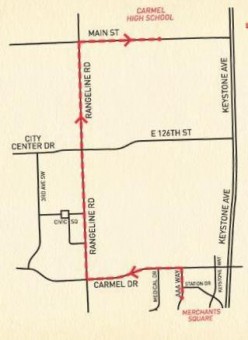 Having worked as a mechanic his entire adult life, it only made sense that Bob Van Note became interested in the hobby of automobile body building. This hobby, over the course of four to five years led to the construction of his own 1925 Miller Sprint car, which Note will drive in the CarmelFest parade.

Note, a member of the Midwest Oldtimers Vintage Racecars Club, constructed the car from various parts, including a 1947 Ford, the engine and transmission of a Pinto, while building the frame and body himself.

The Indianapolis Chinese Community Center will also be joining the festivities as it brings a celebration of cultural awareness, including a classic dragon puppet-and-drum dance.

Established in 1995, the center is Indiana’s largest Chinese nonprofit organization. Originally designed to teach the Chinese language to the children of Chinese immigrants, the organization expanded to include non-Chinese families.

The center also promotes Chinese cultural awareness through events such as a Chinese New Year’s celebration as well as participating in the Indy 500 parade, Carmel Independence Day parade and the Indianapolis Asian Fest.

“We want to show we’re part of this city and help develop the community,” said Ming Ye, president of the center and a Carmel resident.

One of Carmel’s sister cities is Xiangyang in the Hubei province of China.

Also featured in the parade will be the portion of the World Trade Center I-beam planned to be installed as part of a Noblesville memorial to fallen firefighters.

The memorial, which will also feature a statue of a grieving firefighter created by Arizona sculptor Nicholas Wilson, received a $12,000 donation from the Schwartz family, along with the trailer the beam will ride on during the parade.

“When those buildings went down, I remember saying to the guys, ‘They just killed a lot of firefighters,’” said Mike Cook, battalion chief of B Crew at the Noblesville Fire Dept. “Being able to memorialize the fallen firefighters means a lot.”