You are at:Home»Current in Carmel»CarmelFest: This model suits Ahlrichs to a T 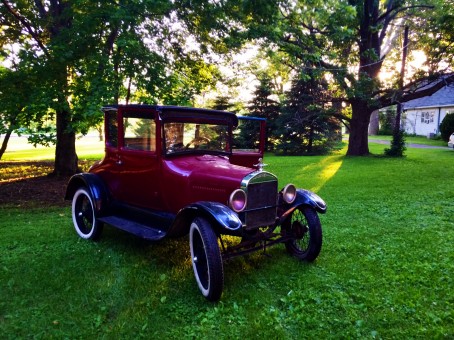 Ahlrich’s original Model T still runs more than half a century after his grandfather purchased it. (Submitted photo)

Those looking for a blast from the past during this year’s Fourth of July CarmelFest parade won’t have to look too far, especially if they enjoy classic cars such as the Ford Model T.
Carmel resident Karl Ahlrichs will be driving one such vehicle, synonymous with mass production and the American spirit, in the parade. It will be the car’s first parade appearance.

“The car is the first vehicle I ever drove when I was 12,” Ahlrichs said. “It’s been a part of my life forever.”
Ahlrichs, who grew up playing on his grandfather’s farm every summer, first encountered the car at the age of five. The vehicle had been bought for $50 from a previous owner by his grandfather in 1955, the same year Ahlrichs was born.
Ahlrichs’ grandfather owned another Model T before then. He was late to his own wedding in 1927 when he decided to stop by a Ford dealership to purchase one.
To this day, the original owner’s registration is on the car’s steering column. The tools used to maintain it over the decades remain, too.
To anyone who knows him, Ahlrichs seems like the perfect fit for a parade.
“Anyone who owns a classic car knows that when you’re driving around in it, you have to wave and smile a lot,” Ahlrichs said.
Ahlrichs also will likely be fielding many questions from curious onlookers and classic-car fans. The 10 classic questions any classic car driver must contend with include its speed, what it burns for fuel, its worth and where the gears are.
“They’ll say, ‘How do you drive this thing?’” Ahlrichs said. “The car is a big hit in my neighborhood. I treat it like a tall go-kart. Kids are welcome to climb in. It’s not a perfectly massaged beauty queen. It’s a happily used, fully functioning, pretty-much original Model T.”
The Model T operates with an accelerator attached to the steering column, much like a modern turn signal. A typical Model T also features three pedals: One for the clutch, one for the brake and one dedicated simply to going in reverse.
“In its entire life, this car has always run,” Ahlrichs said. “It has never been nonfunctioning. It’s been beat up, dirty, never rusty. It has always been where I could pump up the tires, put in gas, water in the radiator, pull it by the tractor and it would get going.”