You are at:Home»Current in Carmel»CarmelFest: Trash Troopers keep festival sparkling 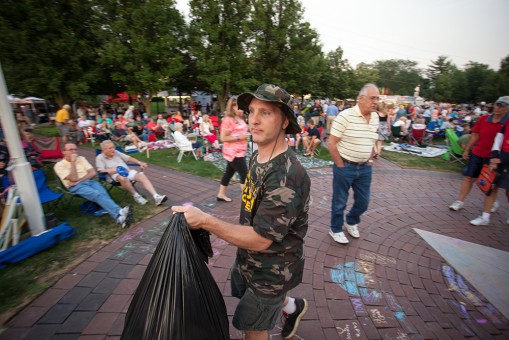 Anyone who has witnessed the cleanup effort that goes on at CarmelFest and after the event is over knows that the city owes a debt of gratitude to the Trash Troopers.

While picking up trash has never been a glamorous job, Trash Troopers founder Gary Frey, a Carmel resident and formerly a chairman of CarmelFest, said he wanted to make the job a little more appealing.

Coming from a military background, Frey envisioned men in camouflage T-shirts and big floppy hats. They would have slogans on the back such as, “Have you hugged a Trash Trooper today?”

This was Frey’s way to prompt community members to volunteer and to promote the festival.

“We try to turn something nasty and dirty into fun,” he said.

Volunteers only have to work in two-hour shifts, and they only have to pick up trash and replace the bags in trash barrels.

Two years ago Frey had a memorable experience while he led that year’s group of Trash Troopers. He was in the beer tent in the North Zone, when a man asked him how he could get one of the hats and T-shirts that said, “Cleanliness is next to Godliness.”

Frey told him to give them two hours of his time. The man volunteered for about five hours that day. This same man came back and volunteered the following year. He said it was some of the most fun he’d ever had.

“The guys who lead it make it fun,” Frey said.

“Gary Frey took the least desirable job and made it cool. It’s the biggest event in Carmel so it takes a lot of hands and a lot of people,” Lawson said.

This will be the fourth year that the Trash Troopers have been involved with CarmelFest.

Frey plans to continue the tradition of the Trash Troopers at CarmelFest for years to come.

“If someone asks you to serve the community as a Trash Trooper, just say ‘Yes,’” he said.