You are at:Home»Current in Carmel»CarmelFest: Unique wares await CarmelFest shoppers 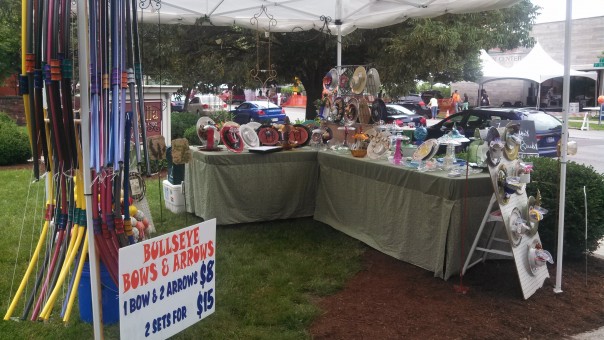 CarmelFest 2014 attendees won’t want for options during this year’s event. A host of new and returning vendors are prepared to sell their wares.

It’s not all knickknacks and gag gifts, though. Vendors such as Old Post Road Oils aim to provide an alternative method of shaving to consumers.

Old Post Road Oils began as the endeavor of Julian Tonning, a retired Navy officer from Holland, Mich., who had grown dissatisfied by typical shaving creams.

It wasn’t until Michael O’Connell recognized the product’s potential while vacationing with his wife in Michigan that the product began to take off. O’Connell, a marketing specialist, teamed with Tonning, bringing the product to Northern Michigan, Chicago and Indianapolis.

“People always come back for more,” O’Connell said. “Our demographics are really looking for quality products. They appreciate it.”

Another duo, this time mother and son, also is planning to unload its wares at CarmelFest, and has no worries that kids and adults alike will flock to its booth.

Kay Fisher of Noblesville began her business, Artfully Dished Up, four years ago after taking a crack at making her own decorative plates, which sell for $10 each. Family members praised her work, encouraging her to sell them.

Soon after, her son, Ben Fisher, decided he needed to start selling his own product. Inspired by books and films such as The Hunger Games, with protagonist Katniss Everdeen utilizing expert archery skills, Ben Fisher began Bullseye Bows & Arrows. Featured as kid-friendly bows made of PVC pipe and stuffed arrows, the product has proven to be a huge hit with younger kids and parents.

One 12-year-old customer managed to drag 10 friends to their booth. Kay would later meet the boy’s father, who said he was impressed to see so many kids playing in the backyard until midnight.

Both mother and son hope to have the space for a makeshift target range so kids can practice before running off with their new toy.

Kay Fisher said events like CarmelFest are really where the products succeed.

“We just enjoy doing them. It’s a joy to meet the ones putting you on an event like that,” she said.