You are at:Home»Current in Carmel»CarmelFest: Worrell to relinquish reins 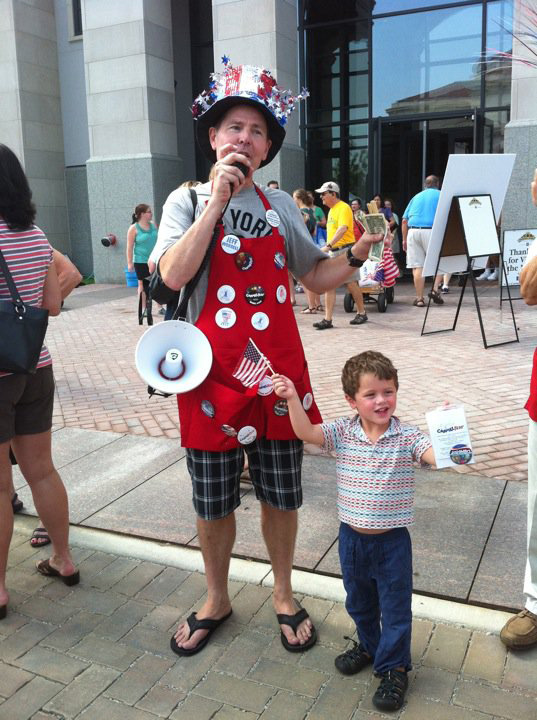 But, as is his custom, outgoing chair will remain involved

A lot can be learned in 22 years of civic service, and that’s precisely what community leader and CarmelFest Chairman Jeff Worrell knows now as he prepares to step down from the position.

Now in his 22nd year of the festival’s 26, Worrell initially was inspired to volunteer for the festival having grown up alongside his own father’s volunteerism in Urbandale, Iowa.

After moving to Carmel, Worrell joined the Carmel Chamber of Commerce.

“I had moved my business (Advantage Medical) to Carmel and opened up on Carmel Drive. One of the committee choices was CarmelFest, so I volunteered for that committee and realized, ‘Wow, this is very similar to what I grew up with.’”

CarmelFest began to grow so fast that the chamber soon gave control of the coordination efforts to a separate committee. In 1994, then Mayor Ted Johnson asked Worrell if he’d lead a group of independent citizens to steer the effort.

Leading such a group has taken great energy, however, and no short amount of determination.

“I guess I’m just wired where I like to try and make people happy if I can,” Worrell said. “By serving, I just see how happy people are with CarmelFest and it really stuck. I have to admit, I was just in awe to be in the same room as Mayor Johnson. That became something I just wanted to do more of. Meet the people who were leaders of Carmel, and by working CarmelFest that was a way to do it. To me it’s all about serving.”

As any leader finds out, though, making the difficult decisions that come with such a role can be frustrating. Worrell recalls the year he had to make the decision to shoot the festival’s fireworks roughly an hour ahead of schedule as a result of an approaching thunderstorm. He later would receive numerous phone calls from angry festival attendees, despite the fact the fireworks otherwise wouldn’t have happened.

Worrell also remembers the backlash the festival received for giving the title of parade grand marshal to Richard Jewell, the police officer who was wrongly accused of planting the 1996 Summer Olympics bomb in Atlanta.

Ultimately, many of the lessons Worrell learned are humorous in retrospect.

When Spark Buttons, now synonymous with CarmelFest’s fundraising for the fireworks display, first were offered, it was largely through a sort of lottery. Each button had a number on the back, and the local newspaper would post one winner’s number, netting them a prize.

“Well, as it turns out, according to Indiana law – and in fairness I think we started before there was a lottery – when you started going and buying lottery tickets, (Hoosier Lottery officials are) like, ‘Where’s your license?’ I’m like, ‘Holy crap, I have to have a license?’” Worrell said.

The CarmelFest committee was then shut down for roughly two weeks while the issue was resolved.

“The lottery director at the time was a very nice man,” Worrell said. “But of course it was, ‘Jeff, you don’t want to spend 20 years in jail for running an illegal lottery,’ so we had to scramble and get everything done. That was an interesting experience. It taught me a lot of things.”

Through it all, Worrell has relied on his fellow community leaders to make it all happen.

“I remember back in those early days Fire Chief (Steven) Couts,” Worrell said. “He would have the fire department show up. Back in those days, we’d have firemen helping us to set up tents, and if there were a problem to be solved, I’d probably call the fire department, not 911, versus now I might have to hire a company to solve a problem. ‘Whatever you need,’ was always what they said.”
Worrell claims he will never forget the year Carmel honored U.S.S. Indianapolis survivors.
“They got a standing ovation from the start of that parade to the very end, which, to me, shows people appreciate what they went through. It just makes me emotional to think about it,” Worrell said.
Worrell remains confident in the festival committee’s plans to expand festivities, and will remain as the coordinator of the fireworks celebration while promoting Spark Button fundraising.

Which is another way of stating: By no means is his job with CarmelFest done.