You are at:Home»Current in Carmel»Brother vows to keep sister’s legacy alive 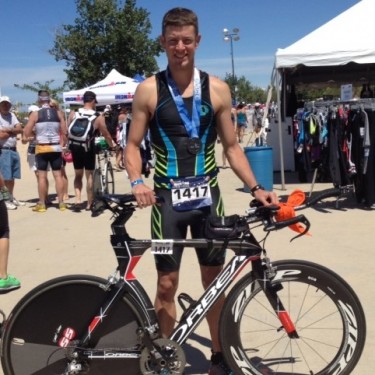 When Casey Crouse’s sister, Ashley, was killed by a drunk driver on campus while attending Indiana University, Casey’s world was turned upside down. It was like an arrow pierced his heart and created a hole that couldn’t be filled.

Ashley was a soul that cared about others more than she cared about herself. While at IU she became a member of a student run philanthropy called Indiana University Dance Marathon. Founded in 1991, IUDM raises funds and donates them to Riley Children’s Hospital. They have raised more than $16 million for Riley since their inception.

As was her nature, Ashley dedicated her time and energy to IUDM and eventually served as vice-president.

Following in Ashley’s footsteps, Casey went to IU in 2006. He wanted to honor his sister’s legacy by becoming a part of the IU Dance Marathon team.

“There was no question I was going to IU to participate in IUDM. I gave my life to dance marathon in college. It’s because I loved it and I did it for Ashley,” he said. “I had just come off of starting a dance marathon at Carmel High School. In my senior year, a group of students and myself started the first Carmel Dance Marathon. The reason we started it at Carmel was because it was Ashley’s dream to have one there.”

Affiliated with IUDM, the Carmel Dance Marathon continues to grow in stature and has become the nation’s largest high school dance marathon. This year’s event was in February and raised $324,000 for Riley Hospital.

“Carmel is flourishing and doing outstanding. It’s come a long way and they still dedicate that marathon to [Ashley],” Casey said.

After Casey graduated from IU, he immersed himself into competing in triathlons. This became a huge part of his fitness routine and fed his competitive spirit. He has competed in half triathlons but that didn’t satisfy his goal of finishing a full triathlon and being able to call himself an “Ironman.”

To achieve Ironman status, Casey must finish a full triathlon which is comprised of a 2.4-mile swim, a 112-mile bike ride and a 26.2-mile marathon. He trains daily, putting in between 10 and 20 hours of training per week.

Recently Casey felt something was still missing and he found himself at a crossroad.

“I became annoyed with the fact that in triathlon you only focus on yourself and eventually it wasn’t as enjoyable,” he said.

He discussed this with his fiancée, and they concluded he shouldn’t quit training but find a new aspiration for it. Reflecting back to that discussion Casey said: “That led me to continue my triathlons and … raise money while doing it for where my heart is and that’s with IU Dance Marathon and Riley.”

Finding renewed energy, Casey plunged headfirst back into training only this time with the focus being on fundraising and honoring Ashley. He intends to compete in the Ironman Wisconsin triathlon on Sept. 4, and raise $50,000 for IUDM and Riley along the way. Casey started his fundraiser in April and is already halfway to his goal.

“Ashley loved the community of Carmel, she loved growing up in Carmel, and she loved Carmel High School,” Casey said.

He hopes the Carmel community returns that love by supporting his fundraiser in whatever way they can.

Read more about Casey’s story online at www.iudm.org/IMforAsh where you can contribute to his fundraiser and pay tribute to Ashley. You can also use social media by searching for “#IMforAsh” on Twitter, Instagram, and Facebook.